Difference between revisions of "Amphibia"

Amphibia is an animated show that debuted on the Disney Channel on June 17, 2019.

It centers around Anne Boonchuy. The story sees Anne along with her friends Sasha Waybright and Marcy Wu are separated and sent by an artifact called the Calamity Box to a world called Amphibia where anthropomorphic amphibians (frogs, toads and newts) live. 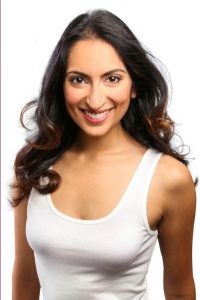 "My name General Yunan. Scourge of the Sand Wars, Defeater of Ragnar the Wretched, aaaaaand... the youngest newt to ever achieve the rank of General in the great Newtopian army!".

The following Gargoyles cast members appeared in Amphibia. They are listed in alphabetical order.

Reference to Gargoyles in Amphibia 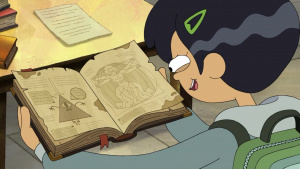 During a flashback where Marcy is at a library in the human world, she finds a book titled Dr. P's Extraordinary Guide To Magic & Mystery.

One section of the book shows a picture of Goliath (mixed with the Vitruvian Man sketch) on the right page following the left which shows Bill Cipher from Gravity Falls. ("True Colors”)