Difference between revisions of "Angela" 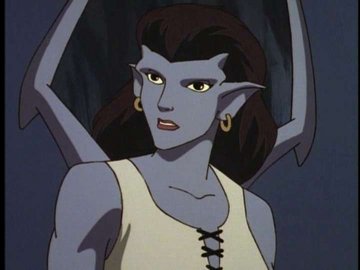 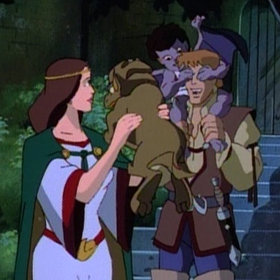 A young Angela and Boudicca with Princess Katharine and Tom

Angela is a female gargoyle and a member of the Manhattan Clan.

Angela, like the other Wyvern rookery eggs, was brought to Avalon by Princess Katharine, the Magus, and Tom while still in the shell, in 995. ("Avalon" Part One) There she hatched in 1058 and was raised by the three humans alongside her many brothers and sisters. All of "The Eggs", as their adoptive parents continued to call them, were raised to know of Goliath as an almost legendary heroic character. ("Avalon Part Two) Later, Angela served as second-in-command of the Avalon Clan with her rookery brother Gabriel as the clan leader.

Angela's adventures began when the Archmage attacked Avalon in 1995. Goliath, Elisa, and Bronx came to Avalon to help defend it from the evil sorcerer, and she befriended them, and fought valiantly alongside Goliath in the battles that followed. Curious about the outside world, she afterwards accompanied Goliath, Elisa, and Bronx when they left Avalon. ("Avalon" Part Two, "Avalon" Part Three)

In the course of the Avalon World Tour, Angela learned her true biological parentage. When she was captured by Sevarius at Loch Ness, he discovered that Goliath was her biological father, and informed her of it. Angela was astounded, but accepted it at once, and began looking up to Goliath as her father. ("Monsters") Goliath was concerned by her desire for a father/daughter relationship. Gargoyle custom dictates that the parents of a generation of gargoyles raise their children communally. Goliath feared that accepting Angela as his daughter would mean he was showing her undue favor. Moreover, he was very concerned about Angela's fate when she learned who her biological mother was. He initially refused to recognize her as his daughter, despite her pleas. But a conversation with Diane Maza during their visit to Nigeria helped Goliath to see that Angela did deserve a special relationship with him, as he was the only gargoyle parent she currently knew and she was the only one of his children currently with him. ("Mark of the Panther") In Paris, Angela also learned that Goliath and Demona were once mates and that Demona was her biological mother, something which shocked her tremendously. ("Sanctuary")

Angela also displayed her quick-wittedness during the World Tour many times, coming to the aid of her companions on the quest. It was she who discovered that Raven's "totem beast gargoyles" were illusions, who supplied the key to Anansi's defeat by realizing that the great spider was too bulky to battle the gargoyles on the ground, and who brought Goliath to his senses when he had become temporarily corrupted by the Eye of Odin. ("Heritage," "Mark of the Panther," "Eye of the Storm")

Angela finally joined the Manhattan Clan upon the end of the Avalon World Tour. The Trio were all delighted to see her, and began eagerly - too eagerly, in fact - courting her. ("The Gathering" Part One) Angela finally persuaded them to slow down after their aggressive wooing got out of hand during the turf war between Tony Dracon and Tomas Brod. ("Turf") Eventually (with some assistance, perhaps, from the souls of Othello and Desdemona) she chose Broadway as her mate, since he alone of the three young gargoyles could truly relate to her on a personal and emotional level, not simply as an attractive female gargoyle. ("Possession") Despite eventually becoming closer to Broadway, Angela remained friends with Lexington and Brooklyn, though Brooklyn had some trouble being around the couple for some time.

Angela finally re-encountered her biological mother when Demona was temporarily captured and imprisoned in the Labyrinth, and Angela tried to understand her better. Demona attempted to convert Angela to her viewpoint but failed, and began to develop tender feelings for her, so much so that she finally rescued Goliath and his clan from Thailog in order to save Angela's life. ("The Reckoning")

Upon moving to the Eyrie Building with the rest of the Clan in October, 1996 Angela showed sadness that humanity, which had just learned of the clan's existence, showed such fear and hatred of gargoyles and also was dismayed that on Halloween they had to pretend to be dressed as gargoyles to fit in among the human populace. Broadway, who Angela had grown ever more closer to, helped convince her that one day humans would accept them. ("The Journey", "Invitation Only") 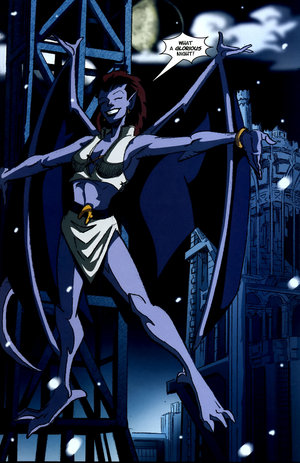 Angela, thanks to her upbringing on the peaceful isle of Avalon, is the gentlest and most innocent member of the clan - she remained somewhat naive, in fact, long after coming to Manhattan. She views harmony between humans and gargoyles as natural, thanks to the aforesaid upbringing, and so cannot understand why the humans of New York fear and hate her clan so much; it bewilders and grieves her. She is very trusting and kind, and a good judge of character. She and Broadway will eventually become committed mates, and they will eventually have three biological children: Artus, Gwenyvere, and Lancelot. They will raise their biological offspring alongside their other rookery children in the traditional gargoyle way. She also loves Goliath as her father very much, and loves and respects Elisa tremendously; she approves of Goliath and Elisa's relationship, although she sees Elisa as more like an older sister than like a mother or stepmother.

Demona is something of a concern for Angela. While well aware of her mother’s true nature, she also cannot help but make an attempt to reach out to Demona, precisely because of their family bonds (having been raised by humans, Angela does see some importance in biological relationships between gargoyles, though she still supports the Gargoyle Way). She finds Demona's hatred of humanity and bitter quest for revenge distressing, as she does Demona's vendetta with Goliath. But she has the hope that Demona will someday be healed of her evil and rejoin the clan, although she has no illusions that Goliath and Demona will become mates again.

Angela is a fierce and bold gargoyle warrior all the same, however, and can even display a fierce temper on occasion. She particularly showed it when the Trio (or at least Lexington and Brooklyn) constantly called her "Angie" while courting her (she hates the nickname), and can hold her own well in a fight. (This initially seems hard to notice because of her sheltered upbringing on Avalon, but Angela has learned more about how to fight during the course of her adventures).

Angela is very attractive, tall and slender with long dark hair worn in a ponytail; she has inherited her father's lavender complexion, although her features are closer to Demona's. When Angela left Avalon, she wore a one piece conservative outfit, but shortly after moving to the Eyrie Building, she changed her outfit to a sexier two piece, one that was more reminiscent of Demona's typical style. This change on her part was made to express her growing up and pursuing her more adult relationship with Broadway. [1]

Angela's name not only serves as a contrast to her mother's, but also as a sign of how Princess Katharine's own feelings towards gargoyles changed for the better after 994. She named most of the Avalon Clan after angels, in fact; not just Angela and Gabriel, but also giving some other gargoyles in the clan such names as Michael, Raphael, Azrael, and perhaps even Archangel.

995. September 28. Princess Katharine, the Magus, and Tom bring the eggs containing Angela and her rookery siblings to Avalon. ("Avalon" Part One)

1995. December 28. Meets Goliath, Elisa, and Bronx when they arrive on Avalon with Tom. ("Avalon" Part Two)

December 30. Helps Goliath battle the Archmage and he is defeated. ("Avalon" Part Three)

1996. January 1. Chooses to leave with Goliath, Elisa, and Bronx on the skiff. Start of the Avalon World Tour. ("Avalon" Part Three)

January 4. Becomes aware of the fact that Raven's gargoyles are illusions. She helps the others in convincing Natsilane to battle Raven. ("Heritage")

January 17. Imprisoned alongside Nessie and befriends her. Sevarius tells Angela that Goliath is her father, and uses her to lure Nessie and Big Daddy so that he could capture them. His plan fails when Goliath and the others come to the rescue. ("Monsters")

January 21. Listens in on Goliath's conversation with Demona and Thailog in Paris and figures out that Demona is her biological mother. Tries to get Goliath to admit to it, but he won't. ("Sanctuary")

January 27-29. Imprisoned along with Goliath and Elisa in Ireland by the Banshee. Saved by Bronx and Cu Chullain. ("The Hound of Ulster")

May 7. Sevarius informs Demona that Angela is her biological daughter.

May 17. Angela and her companions go to Kara Digi in Nigeria and encounter Anansi. Angela suggests to cut Anansi's web so the spider would fall. Goliath acknowledges Angela as his daughter, to her delight. ("Mark of the Panther")

May 21. Motivates Goliath to remove the Eye of Odin from himself before he can kill Odin in Norway. ("Eye of the Storm")

June 11. Captured by Nokkar on Easter Island along with Goliath and Bronx. Saved by Elisa. ("Sentinel")

June 14-15. Captured along with Goliath, Bronx, and the Ishimura clan for Taro's Gargoyle Theme Park in Japan. Elisa and Hiroshi help the gargoyles escape. ("Bushido")

June 17. Introduced to Peter and Beth Maza in Arizona, and is captured along with Goliath to be used as bait by Xanatos to lure Coyote. Saved by Bronx and the Mazas. ("Cloud Fathers")

June 18. Encounters Coldstone in Tibet and informs him about Gabriel. ("Reunion")

July 4-6. Returns to Avalon and is forced to fight Oberon with Goliath and Gabriel. Later, Oberon declares the Avalon Clan and Manhattan Clan as immune to his magic. ("Ill Met By Moonlight")

July 14-15. Comes in contact with Demona while she steals technology from the Golden Cup Bakery. After Demona is imprisoned in the labyrinth, Angela takes the first watch for guard duty. She introduces herself to Demona. ("The Reckoning")

August 2-3. Enlisted by Elisa along with the trio to help her take down the gangs of Tony Dracon and Tomas Brod. She gets annoyed at the trio as they compete immaturely for her affections. She finally sets them straight and the gargoyles work together to help Elisa. Angela tells the trio that she likes each of them, and that if something happens, it would happen in its own time. ("Turf")

October 12-13. Lured along with the rest of the clan to Coney Island by Demona and Thailog, where they are captured. Demona releases the clan after Thailog threatens to kill Angela. Angela fights and subdues Delilah before watching her mother fall from a toppling roller coaster. Goliath tells Angela that Demona's love for her is the most goodness she has shown in a long time. ("The Reckoning")

October 16-17. Angela's body is temporarily possessed by the soul of Desdemona for Puck's scheme to segregate the three souls of Coldstone into three gargoyle robot bodies. Broadway's body is possessed by Othello. Angela and Broadway grow closer after this. ("Possession")

October 25. The hunters destroy the clocktower and the gargoyles are forced to flee. Jon Canmore exposes the gargoyles to the world at large on the news. ("Hunter's Moon" Part Three)

October 26. Elisa seemingly falls to her death. A final showdown occurs at Saint Damien's Cathedral between the clan and the Hunters. After Elisa arrives, Goliath foils Demona's Operation Clean Slate plan. The gargoyles leave the cathedral with Xanatos and are taken to Castle Wyvern. ("Hunter's Moon" Part Three)

October 29. Shares first kiss with Broadway in the castle library. ("The Journey")

October 31. Attends the Masque at the Eyrie Building during Halloween, dressed as Dorothy from The Wizard of OZ. She gets angry at Elisa for coming to the party with Morgan. ("Masque")

November 1. Fights with Hollywood during the battle between the Manhattan clan and the clones. Thailog collects DNA samples from the whole clan by scratching them with daggers in his gauntlets. ("Bash")

November 2. Elects to stay with Broadway and Brooklyn in Manhattan when Macbeth seeks the clan's aid in guarding the Stone of Destiny. ("The Rock")