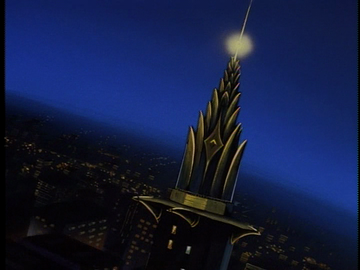 Apex Tower is a skyscraper in New York City noted for its silver falcon-headed gargoyle decorations.

In 1924, Mace Malone hid a bag of marbles in one of the heads, and duped his partner Dominic Dracon into believing that what he had actually hidden here was the jewels that the two of them stole. Seventy-one years later, it was the setting for the climax of the "Silver Falcon" adventure, where Elisa, Matt, and Broadway defeated Tony and Dominic Dracon. ("The Silver Falcon")

The Apex Tower's name is not used in the series, and comes from Greg Weisman. It bears a striking resemblance to the real-life Chrysler Building in New York City, and many Gargoyles fans have for a long time mistakenly believed this building to actually be the Chrysler Building. [1]