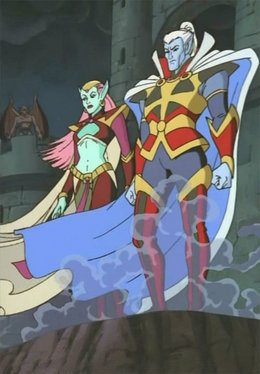 Avalon was formed at about the same time that the Third Race were, from magic. It was ruled over first by Queen Mab, then, following her overthrow, by her son Oberon, who still rules there today.

In 995, Oberon, angered at his Children's scorn and contempt for mortals, and particularly that displayed by Titania, banished the entire Third Race from Avalon for a thousand years, leaving the Weird Sisters behind to bar the entrance on a floating barge nearby. Shortly afterwards, Princess Katharine, the Magus, and Tom fled to Avalon with the eggs following Constantine III's usurpation of the Scottish throne. After the Magus defeated the Weird Sisters, the three refugees settled on Avalon with the eggs, and lived there contentedly (more or less) for the next thousand years.

In 1995, the Archmage decided to conquer Avalon, to use it as his base of operations for waging war upon the human world. He joined forces with the Weird Sisters, Demona, and Macbeth to attack the Avalon Clan and destroy it. The Avalon clan, aided by Goliath, Elisa, Bronx, and King Arthur (whom Elisa awakened from his sleep), defended its home against the evil sorcerer and his followers, and finally won.

Not long afterwards, Oberon and Titania returned to Avalon, and learned about the Avalon clan from the Weird Sisters. Oberon wanted to banish them from the island, but the Avalon clan created an iron bell and used it to defeat him, after which Princess Katharine persuaded him to let them stay. Oberon not only granted them permission to do so, but even made the Avalon gargoyles his guard of honor. Afterwards, he held the Gathering, bringing home all of the Third Race (except for Puck, in the end); currently, the Fair Folk are assembled upon Avalon. 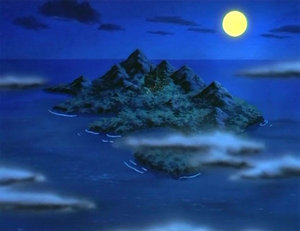 Avalon cannot be found on a map of the world; it is reachable only by magic. The usual procedure for entering Avalon for mortals is to recite a Latin incantation while upon a body of water (which can range in size from the sea to a college swimming pool); Oberon's Children, on the other hand, can presumably come and go through their innate abilities, without needing water nearby. Leaving Avalon is somewhat trickier; it does not send you to where you wish to go, but to where you need to be (hence the Avalon World Tour that Goliath, Elisa, Angela, and Bronx involuntarily embarked upon after leaving the enchanted island).

Avalon is, in a sense, solidified magic, and an experienced human wizard can actually tap into that magic, as the Magus did during his battle with the Weird Sisters; it is not easy to do, however, and even cost the Magus his life. While faerie magic is permitted in Avalon, human magic (particularly that coming from artifacts such as the Grimorum Arcanorum) is not. (The Archmage did temporarily evade this proscription by eating the Grimorum, but in the end he paid a fatal price). Also because of its magical nature, time passes slower on Avalon; for every hour spent there, one day goes by in the outside world. It is eternal summer there.

Avalon has a few landmarks of note: the palace where Oberon and Titania live (and which also serves as the home for the Avalon Clan), the Hollow Hill where King Arthur slept (and where the Magus has now been laid to rest), a volcano, and a marble gazebo and pool which served as the Archmage's headquarters during his invasion of Avalon. An apple orchard stands in the palace grounds.

The relationship between Avalon and Oberon is uncertain. On the one hand, Oberon can command the island to do his bidding, ordering even the rocks to throw themselves at intruders. On the other hand, Avalon sent Goliath and his companions to Manhattan at the end of the World Tour to foil Oberon's plan to abduct the infant Alexander.

Avalon emerges in Arthurian legend as a mysterious enchanted island, associated with the faerie-folk, to which King Arthur was taken after his final battle at Camlann. Its earliest known mention comes from Geoffrey of Monmouth in his "History of the Kings of Britain", where it is mentioned as being the place where Excalibur was forged, and to which Arthur was taken after his final battle. In his "The Life of Merlin", a sort of sequel to his better-known "History", he gives a more detailed description of Avalon as a magical island, to which Merlin and the legendary Welsh bard Taliesin took the wounded Arthur, where Morgan le Fay - portrayed here as a benevolent figure - received him and tended him.

Avalon seems to have developed from the legends about paradisical islands in Celtic mythology; it is worth noting that the Welsh form of its name is "Ynys Avallach" or "The Isle of Avallach", Avallach being a mysterious otherworldly figure in Welsh myth, portrayed as Morgan le Fay's father. However, its name also seems to be derived from "apple", fitting in with the fact that apples were commonly found in the magical islands of Celtic myth. The Avalon of "Gargoyles" likewise contains an apple orchard in the grounds of Oberon’s palace.

While the Arthurian legends often interpreted Avalon in much the same light that "Gargoyles" did, as a remote enchanted island, a different view of Avalon emerged in 1190, at Glastonbury Abbey in Somerset. Some of the monks of Glastonbury reported discovering the grave of King Arthur within the Abbey, marked by a lead cross which described Arthur as being buried in "the Isle of Avalon". This suggested that Avalon was merely an old-fashioned name for Glastonbury and not a magical island after all. This possibility was assisted by the fact that Glastonbury was a marshy region in the Dark Ages and could have been an island at one point, and that it does have a reputation for otherworldliness. In the Gargoyles Universe, however, Avalon and Glastonbury are clearly not identical.

After this discovery of "Arthur's tomb" (historians and archaeologists remain divided as to how genuine this discovery actually was), a different trend concerning Arthur's fate emerges in the writings about him; while some Arthurian romancers continued to claim that Arthur did not die but was taken away to Avalon, others, such as the anonymous author of the alliterative "Morte Arthure", hold that he did indeed die and that Avalon and Glastonbury were one and the same. Sir Thomas Malory, in his "Le Morte d’Arthur", was ambivalent, portraying Sir Bedivere discovering a tomb believed to be Arthur's at Glastonbury, but also stating that many people still believe that Arthur is not dead and will someday return (Malory himself did not believe this). Alfred Lord Tennyson, in his "Idylls of the King", definitely held for the picture of Avalon as a magical island rather than a real-world locale, and had Arthur describe it in "The Passing of Arthur" as a place "Where falls not hail, or rain, or any snow,/ Nor ever wind blows loudly; but it lies/ Deep-meadow'd, happy, fair with orchard lawns/ And bowery hollows crown'd with summer sea". This description undoubtedly helped influence the depiction of Avalon in "Gargoyles" as a place of eternal summer - alongside the description of Celtic paradises in legend, which were sometimes even known as the "Summer Country" or the "Region of the Summer Stars".