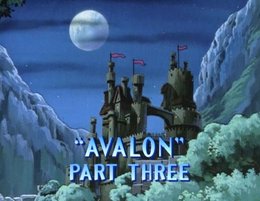 "Avalon" Part Three is the thirty-sixth televised episode of the series Gargoyles, and the twenty-third episode of Season 2. It originally aired on November 22, 1995.

King Arthur is introduced in this episode, although he was mentioned in "A Lighthouse in the Sea of Time" (as King Arthur) and in "Avalon Part Two" (as the Sleeping King). Arthur states that he was awakened earlier than was intended, a statement reinforced by the Stone of Destiny and the Lady of the Lake in "Pendragon". In "Rock of Ages", it is hinted that Arthur was originally supposed to awaken for the Space-Spawn invasion in 2198.

Both the Archmage and the Magus die.

The Grimorum Arcanorum is destroyed in this episode. Goliath takes the Eye of Odin and the Phoenix Gate so that they do not fall into the wrong hands. He will possess the Eye until "Eye of the Storm", and the Gate until "Future Tense".

Goliath, Elisa, Angela and Bronx embark on the Avalon World Tour in this episode. It will eventually conclude in "The Gathering Part One".

Demona and Macbeth are released from the Weird Sisters' spell, which they have been under since "City of Stone Part Four". The two of them are sent to the mortal world on a skiff together, and will next appear in "Sanctuary".

Boudicca, the Avalon Clan's gargoyle beast, is first named in the dialogue here. She shares her name with that of another historical figure. Presumably all that Princess Katharine, the Magus, and Tom knew of her namesake was that she was a brave warrior-queen; the historical Boudicca's career almost evokes that of Demona, in the sense of fighting back against an oppressor with deeds just as bloodthirsty and brutal as the original wrongs.

Originally, Greg Weisman considered having the Magus survive the battle and leave with King Arthur afterwards. He changed his mind when he realized that one of Arthur's activities after leaving Avalon was to find Merlin, and did not want to wind up having Arthur with two wizards in his following; after rejecting this original fate for the Magus, he quickly developed the idea of having him die in the battle as a sign of the cost of war.

The flashback scenes accompanying the Magus' story to Elisa of how Katharine and Tom fell in love have gained much controversy among Gargoyles fans, for they have been claimed to show Katharine and Tom playing with "toddler" versions of Gabriel, Angela, and Boudicca in the daytime - obviously impossible! In fact, a closer look at this scene shows that it is taking place at night; however, it is immediately preceded by a daytime scene of Katharine and Tom together as the Magus looks sadly on. Perhaps fan memories unwittingly combined the two scenes.

Incidentally, in the first of these flashbacks (set when Tom is still a small boy), Tom is shown wearing his old peasant boy garments from "Awakening", even though, during the journey to Avalon, he was wearing his Guardian uniform instead. (Maybe he took along a change of clothes?)

The battle between Macbeth and King Arthur takes place in an apple orchard - an appropriate piece of topography for Avalon, since its name means "island of apples."

The Weird Sisters are bound by the Magus' chains with their backs to each other and the chains wrapped all of them together. When they explain that MacBeth and Demona won't remember anything from when they were controlled and tell Goliath to keep his part of their bargain, they are seen facing each other inward and have cuffs binding their hands with the glow of the chains beneath them.

A bit of the battle between Macbeth and King Arthur is cut out.