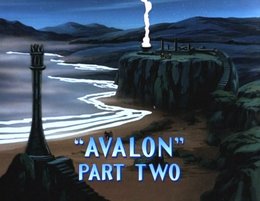 Greg Weisman describes this time loop as a "quirk of the timestream", a "working paradox" without independent origin, as opposed to the "Grandfather chestnut". When trying to illustrate the mechanics of the loop, Weisman compared it to the "Gettysburgh chestnut": "I am a historian. My specialty is Abraham Lincoln. I travel back in time and meet him just before he's scheduled to give the Gettysburgh Address. To my horror, I discover that he's got writer's block. The most famous speech a president ever gave, and Abe can't think of what to write. I panic. And "write" the speech for him. Of course I didn't compose it. I simply write down the Gettysburgh Address from memory. Abe loves it. Gives the speech. Reporters transcribe it. Historians put it in history books. I study it and go back in time. Time flows unbroken. It is a "working" paradox. A paradox that doesn't short circuit the time stream. Now it raises a HUGE question? Who composed the Address? Not Abe, he got it from me. Not me, I got if from a history book. Not the historians or the reporters, they got it from Abe. The answer is it was born with the timestream, created by God or the Big Bang or whatever. It is mysterious. But it works."[1] Both the Gettysburgh and the Archmage's loop fall in line with the bootstrap paradox theory, which essentially represents a causal loop that was not created by third party tempering of the timestream—it simply exists.