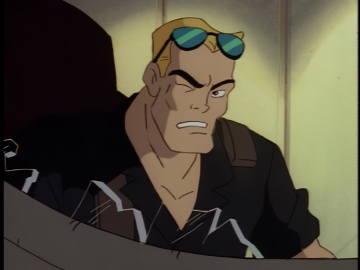 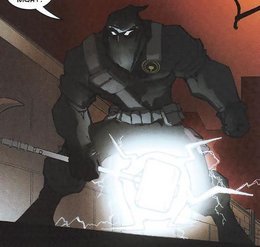 Banquo in his Quarryman uniform.

Banquo was one of Macbeth's henchmen. He later joined the Quarrymen.

Banquo was already working for Macbeth by 1995. He has twice assisted Macbeth in his schemes, consistently partnered with Fleance (who he once dated). [1] Initially Banquo helped steal the Scrolls of Merlin for Macbeth and later on he helped Macbeth in his attempt to claim Excalibur. ("A Lighthouse in the Sea of Time", "Pendragon") They also attended his wedding to Dominique Destine in Paris. ("Sanctuary")

At some later date, Banquo and Fleance left Macbeth's service and eventually came to work for Castaway (an ironic move in light of Castaway being descended from Macbeth's old enemies Duncan and Canmore). They helped him set up and train the ordinary citizens whom Castaway recruited for the Quarrymen, and fought against Goliath and Elisa alongside him. ("Nightwatch", "The Journey")

Banquo and Fleance are both aware of Macbeth's true identity as the historical Macbeth.

Banquo is a human man. He is muscular and capable of flying various aircraft while squinting. In the outline memo for "A Lighthouse in the Sea of Time", Greg Weisman muses that Banquo isn't his true name, and that Macbeth only insists on calling him Banquo as an inside joke that he might not fully appreciate or understand. [2]

Banquo is never actually named in the series, but only in the ending credits. His name, of course, is a reference to the Banquo of Shakespeare's Macbeth, a former friend of Macbeth's. Macbeth later comes to fear and distrust Banquo when the Weird Sisters prophesy that Banquo's descendants will rule Scotland. He finally murders Banquo, although his son Fleance escapes, to eventually become the ancestor of James I of England. (Banquo and Fleance were, in fact, completely fictional, invented by the Stuarts to provide themselves with a distinguished Scottish ancestry. James's belief that he was descended from them seems to have been one reason for Shakespeare's negative portrayal of Macbeth in his play.)

Banquo's original model sheet showed him squinting with one eye, which left animators assuming that the squint was permanent. It wasn't noticed until after his appearance in "A Lighthouse in the Sea of Time" which meant that it was too late to fix the error. [3]