Difference between revisions of "Bardolph" 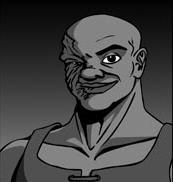 Bardolph is a member of Falstaff's gang.

Bardolph is named after one of Falstaff's associates in Shakespeare's Henry IV plays (he also appears in Henry V and The Merry Wives of Windsor). One of the leading members of the gang, Bardolph is noted for his extremely florid complexion, which Falstaff and the other members of the cast often make jokes about; presumably this is the inspiration for the fire-breathing ability of the Bardolph of "Bad Guys".

In Henry V, after Falstaff's death, Bardolph enlists in Henry V's army for the war in France. On the march from Harfleur to Agincourt, Bardolph is caught looting a church and sentenced by the king to be hanged. (This incident comes from the English chronicles, though the identity of the thief as Bardolph is Shakespeare's invention.)