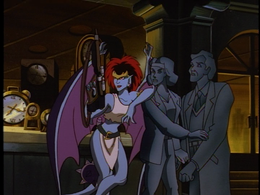 Seriously, not Brendan and Margot ;)

The look-alikes of Brendan Quarters and Margot Yale were two humans who were killed by Demona.