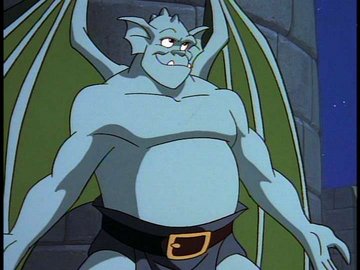 Broadway - A member of the Wyvern clan.

Afterwards, Broadway was put under the Magus’s curse of stone sleep with the other gargoyles, to awaken in 1994.

Broadway is the strongest of the trio, and a good fighter, but also gentle and sensitive. He is one of the best judges of character in the clan, and has a strong sense of concern about his fellow clan-mates and friends. He particularly shows this for Elisa, helping her out whenever he can. Much of this is thanks to guilt on his part; Broadway once inadvertently shot Elisa with her own gun, and feels very regretful about that still. His protectiveness towards the detective is one result of this incident; another is a very strong dislike of guns. He won’t handle them, and even destroys them if he encounters them.

Broadway also displays this sensitivity in his relationship with Angela. While Brooklyn pursued her merely because of her good looks and availability, and Lexington because Brooklyn and Broadway were courting her, Broadway actually got a sense of what Angela was like as a person, her likes and dislikes, her aspirations and her fears. For example, early on, he realized that she disliked her nickname "Angie", and so stopped calling her that; Brooklyn and Lexington did not discover that on their own, but had to learn it from her the hard way. This led to her acceptance of him as her mate. Indeed, they will even have three children in the future: Artus, Gwenyvere, and Lancelot.]

Broadway likes to eat, as his tremendous girth confirms. Brooklyn and Lexington often tease him about it, as well, which he takes with great dignity. But Broadway is no mere winged garbage disposal. Alongside his relationship with Angela, he also has a strong interest in mysteries and detective work, particularly enjoying detective movies on television. Indeed, his interest in these helped him solve the Silver Falcon case, and also alerted him, before Goliath, to the real reason for Elisa’s behavior during the time that she was pretending to be a "crooked cop" in order to shut down Tony Dracon’s protection racket. His good observation skills, already noted in the matter of his relationship with Angela, are very useful to him in this area.

Originally, Broadway was illiterate, and proud of it, considering books a waste of time. His attitude changed, however, during the Scrolls of Merlin adventure, when he saw how Macbeth, by reading about King Arthur’s reign, could describe it so eloquently that it had seemed almost as if he had been there. Broadway began taking reading lessons afterwards with Hudson (who also learned the value of reading in that adventure), first reading the newspaper with him, and then, by the time that the gargoyles were living in the castle again, having moved on to Shakespeare’s "Romeo and Juliet", which he read with Angela.

Broadway is Hudson’s biological son. However, neither they, nor anybody else, know this, and it would not matter to them even if they did know.