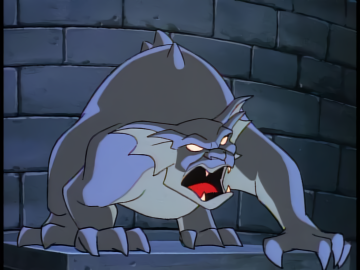 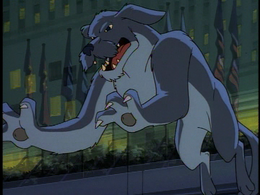 While Bronx's adventures in New York City were few, he did accompany Goliath, Elisa, and Angela on the Avalon World Tour. He displayed his useful olfactory abilities when he tracked down the Werepanthers Fara Maku and Tea Gora to Kara Digi during his stay in Nigeria. ("Mark of the Panther") But his greatest adventure of the Avalon Tour came when he met Rory Dugan in Ireland, and helped him realize his true destiny as the reincarnation of Cu Chullain so as to save his companions from the Banshee. Bronx may, in fact, be the reincarnation of the Hound of Ulster. ("The Hound of Ulster") [2][3] He is also one of the few gargates that has at one point remained as flesh during daylight. This occurred when he found the Obsidian Pendent linked to the Mayan Sun Amulet and held on to it after sunrise. ("The Green")

After his return from the World Tour, Bronx had an adventure on his own while Goliath and Hudson battled Hakon's ghost and Wolf and Angela and the trio helped Elisa take down Tomas Brod. [4] Cagney may have accompanied him on this adventure. [5]

He and Boudicca, whom he met on Avalon, have become mates, if currently separated ones. [6] Bronx and Boudicca will have one hatchling that will stay on Avalon with its mother... for starters. [7]

Bronx's biological parents are "Chomp" and "Chaw". [8] He has a deep blue color, fan-shaped ears, two small horns above his brows, and three spikes running along his back. His tail is very short. 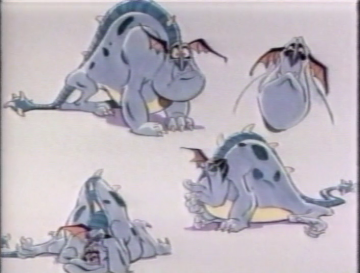 Bronx as seen in the original pitch.

Earlier in the development of the series, Bronx was slated to be the comic relief character. [10] He was described as "angst-ridden", the one member of the clan who really wasn't happy about being awake in the modern world. [11] Concept drawings suggest Bronx being able to hover just a few inches above the ground by flapping slightly oversized ears like a hummingbird. [12] It was later decided that Bronx would be more interesting if he acted more like an actual dog rather than a cartoon pooch.

Another possible name for Bronx was simply "Dog". [13]