Difference between revisions of "Caesar Augustus" 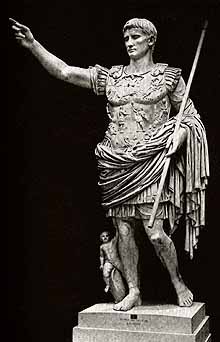 During his reign, gargoyles were scarce in the Roman Empire, but occasionally a gargoyle was brought into his presence. At that time, gargoyles’ garments did not turn to stone with them, and so when they awakened from their stone sleep, their clothes would be torn apart in the process. Augustus disapproved of this display of nudity, and so asked his advisor, the original Magus, to solve this problem. The original Magus responded by placing the Spell of Humility upon every gargoyle in the world, causing their garments and possessions to enter stone sleep with them during the daytime henceforth.

Caesar Augustus was the great-nephew of Julius Caesar, born under the name of Caius Octavius in 63 B.C. He was adopted by his famous great-uncle, and when Julius Caesar was assassinated on the Ides of March in 44 B.C., inherited his wealth and estate. Octavius, then changing his name to Caius Julius Caesar Octavianus (Octavian for short), then rose to become a prominent political figure in the Roman Republic, during the civil wars that followed. He first allied with Mark Antony in the Second Triumvirate, helping him defeat his great-uncle’s assassins Brutus and Cassius at the Battle of Philippi in 42 B.C, and then afterwards vanquished Antony and his famous ally, Queen Cleopatra VII of Egypt, at the Battle of Actium in 31 B.C. By 27 B.C, Octavian had become the undisputed ruler of Rome, and became its first Emperor, under the title of Caesar Augustus.

Augustus was a highly able man with considerable political acumen; he was able to keep the peace in Rome throughout his reign (except for some clashes with the Germans in the north), and healed the Roman Republic (by now the Roman Empire) from the damage inflicted upon it by many decades of civil strife. Like the Augustus of the Gargoyles Universe, he was a firm believer in public morality, attempting to restore Rome to its original "family values" and steer it away from its increasing decadence; unfortunately, he seems to have had far less success with his human subjects than with the gargoyles. Even his own daughter and granddaughter, both named Julia, lived scandalous lives which grieved him. But he was a strong ruler, and well deserves his reputation as one of the great figures of western history.