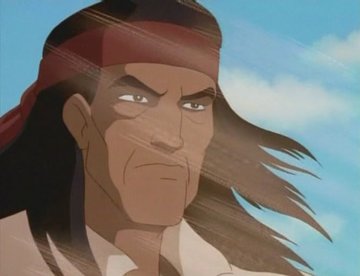 Carlos Maza was a member of the tribal police in Arizona for a local Native American tribe (probably the Hopi) around 1960, and a keen believer in the old ways of his people. He did his best to raise his son in these traditions, even having him do the Dance of the Coyote when he (Peter) was a boy. However, to his displeasure, Peter decided to leave Arizona for New York City in 1960, beginning a rift between them that lasted for the rest of Carlos' life. By 1996, Carlos was dead, from an unknown cause; however, Peter, during his return visit to Arizona that year (which led into his encounter, alongside the gargoyles and Elisa, with Xanatos and Coyote 4.0), managed to make his peace with his father at his graveside. ("Cloud Fathers")