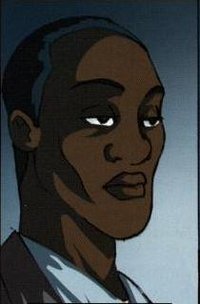 Cedric Harris is a detective in the NYPD, and a member of the Gargoyle Taskforce. Tri Chung is his partner. ("Invitation Only")

Greg Weisman has previously used the name Cedric Harris in his development of the series Roswell Conspiracies: Aliens, Myths and Legends. In Greg's bible for that series, Cedric Harris is described as a "WeaponsMaster" and a part of a combat team that takes care of alien emergencies. The character is codenamed "Postal Worker".[2] He first tried to use the name Cedric Harris as the Chief of Staff to the Mayor of Star City in his Black Canary miniseries that he wrote for DC, which was never published.[3]