City of Stone Part One 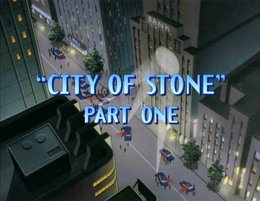 "City of Stone" Part One is the twenty-second televised episode of the series Gargoyles, and the ninth episode of Season 2. It originally aired on September 18, 1995.

Some of Demona's tragic past is revealed and her centuries-long feud with the Hunter is established, while in the present she uses a spell from the Grimorum Arcanorum to curse most of the Manhattan humans so that they turn to stone at night. Back in the past, after Demona's failed plan with the Captain that led to the Wyvern Massacre, she becomes a rogue gargoyle, and during one encounter while raiding a barn for food, she slashes the young Gillecomgain across the face, permanently scarring him; an act that will haunt her species for centuries to come. Gillecomgain becomes the first Hunter, and as an adult, works for King Duncan, who uses the Hunter reputation and insignia for political gain. He sends Gillecomgain to assassinate his cousin Macbeth's father, Findlaech, in order to ensure Macbeth doesn't become king in his staid. Gillecomgain is successful, but fails to kill the young Macbeth as well when Demona intervenes, and in a rare act of kindness, saves Macbeth and his future wife Gruoch while Gillecomgain gets away to report to his king.

The Manhattan Clan intervenes with a hostage situation at a bank where a terrorist and her flunkies are holding Brendan and Margot captive. The Clan stops the terrorist, but the couple is still afraid of the gargoyles.

The mysterious Weird Sisters, introduced in this episode, are always in the background of both the past and present where they subtly shape the events and manipulate the characters, while their motives remain unclear. They appear to the gargoyles in the bank but are invisible to everyone else in the room. They appear as old gargoyle hags to Demona and her clan in 1020, informing her of the Hunter's imminent attack at Castle Moray and urge her to go there to stop the Hunter and ally with his enemies. Later, they appear as serving wenches working for Duncan.

Demona escapes the Wyvern Massacre by going off to hide under a cliff during the day, as she didn't trust the Captain's promise to protect the clan. At the castle, she spots Goliath and runs away yet again, only to return to find him trapped in his enchanted stone sleep, and witnesses Princess Katharine, Tom, and the Magus cart the gargoyle eggs away. Unable to admit to herself that the tragic happenings are mostly her own fault, she uses the humans as a scapegoat.

Demona has rounded up all the scattered gargoyles in Scotland, such as those from the Wyvern splinter clan, and has become their leader. By 1020 the gargoyles have become a nuisance to humans; raiding their storehouses to steal food and killing the guards. Demona's Second expresses his dislike of the situation and suggests making peace with the humans, to which Demona reacts violently.

The same night Gillecomgain comes to assassinate Findlaech, Bodhe and Gruoch are visiting Castle Moray. Findlaech pledges his loyalty to King Duncan, while Gruoch and Macbeth make a connection while playing chess together.

Duncan rewards Gillecomgain with the stewardship of Moray after he murders Findlaech.

In the present time, Demona makes a deal with Xanatos, offering to share a spell of prolonged life with him while he allows her to broadcast her spell over Manhattan's television airwaves at PackMedia Studios. Demona instead broadcasts her "stone by night" spell, then ties up Owen and forces him to watch. Just before sunset, Owen calls Xanatos while he and Fox are on their way to the studios in his helicopter. Both Owen and Fox turn to stone and the helicopter plummets towards the street. Meanwhile, Elisa goes to tell the gargoyles about Demona's broadcast and turns to stone in the clocktower.

"Don't come near me!"
"Don't gush all over us, okay? It's kind of embarrassing." - Brendan, Margot and Brooklyn

"Do you think the humans want peace? We are all that are left of our kind in this world, and the Hunter begrudges each of us our lives." - "Second" and Demona

Once again, a few familiar characters make cameos; Brendan and Margot are the bank robbers' hostages, and the two gargoyles whom Demona almost warns are Othello and Desdemona. There is also a glimpse of Princess Katharine, the Magus, and Tom loading up the eggs in their cart before leaving Castle Wyvern (as a foreshadowing of "Avalon" Part One).

Demona describes Owen, after overpowering him, as "the tricky one". This is another subtle hint to his true identity as Puck, revealed in "The Gathering" Part Two.

While Xanatos' desire for immortality won't officially enter the series until "The Price", his interest in Demona's offer of using stolen minutes from people's lives to expand his life-span is the first hint of that ambition.

Demona's earliest flashbacks crossover with the events of "Awakening: Part One" and "Awakening: Part Two". In particular, we learn more about the pact between Demona and the Captain of the Guard, mentioned in "Awakening: Part Five", and how Demona was able to survive the Wyvern Massacre.

Othello and Desdemona appear in Demona's flashback, prior to their deaths during the Wyvern Massacre. After the Massacre, she can be seen holding up the broken face of Othello, which in "Reawakening" was used to create Coldstone.

The Hunter appears for the first time.

"City of Stone" was originally intended to be a direct-to-video release, but the idea was rejected by Gary Krisel because Goliath and his clan did not have a large enough role in it. Fortunately, the story idea was turned into a Season Two multi-parter rather than abandoned altogether; Gargoyles would have been much poorer without it.

Macbeth's backstory in "City of Stone" differs strongly from the familiar plotline of William Shakespeare's Macbeth, of course, making Macbeth the hero and Duncan the villain. Instead, it bases itself on the Macbeth of real history, whose life-story was heavily distorted by Shakespeare (due to the fact that Shakespeare's own sources had already distorted the story). Also, Shakespeare was writing the play during the reign of James I, who was a descendant of Duncan and Malcolm Canmore - and also believed himself to be a descendant of the fictional Banquo and Fleance - thus making it anything but prudent to tell the actual story. Shakespeare may have also deliberately altered the story to produce a nightmarish atmosphere, chronicling its title character's descent into crime and bloodshed. John Rhys-Davies, who provided the voice of Macbeth in Gargoyles, was initially astonished at this alteration of the familiar play and even accused Greg Weisman of revisionism, but changed his mind when learning that it was based on the actual history of 11th century Scotland and then became very enthusiastic about it. [1]

The Weird Sisters are, of course, the Gargoyles take on the Three Witches, but interpreted as being much more powerful than mere witches. While critical opinion is divided as to whether Shakespeare meant the Witches of his play to be mere human crones practicing black magic, or the goddesses of destiny (which was what his source, Raphael Holinshed, interpreted them as being), Greg definitely saw them as the latter. In fact, he made them into a blend of three different mythical triplets: the Fates, the Furies, and the Graces. Furthermore, each one of the Weird Sisters focuses on a different one of these trios: silver-haired Luna represents Fate, golden-haired Phoebe Grace, and raven-haired Seline Vengeance. The shift in their characterization throughout the series is described by him as due to the shift in which Sister's influence is uppermost at the time.

The individual names of the Weird Sisters are all taken from moon-goddesses in classical mythology. Luna was the Roman goddess of the moon, Phoebe a Titaness (the mother of Leto and grandmother of Apollo and Artemis) who was often associated with the moon - particularly in Elizabethan poetry such as Shakespeare's plays, and Selene the Greek goddess of the moon (Artemis took on that role only very late in the development of Greek myth) - and, incidentally, the sister of Helios, who would have a namesake character in "The New Olympians". We do not know as yet, however, exactly what link the Weird Sisters have to the moon, if any.

The Weird Sisters' three different ages (little girls, young women, ancient hags) are based on the concept in modern-day mythological studies of the feminine trinity of Maiden, Mother, and Crone.

Greg had plans to bring back the bank robbers in the spin-off Bad Guys, presumably as adversaries for the Redemption Squad.

Just before Demona breaks in on her signal, Elisa is watching the classic movie Casablanca on television.

Oddly, the petrified Elisa at the end of Part One is facing away from the gargoyles.

Toon Disney modified Goliath's conversation with the Weird Sisters ("I will never be like this terrorist." "We were not talking about this terrorist.") after the September 11 attacks, removing the word "terrorist" from the dialogue. The DVD release contains the original dialogue.

After Goliath and the Trio have subdued the bank robbers, he gets into a conversation with the Weird Sisters in their child form. During the course of that conversation he originally said "I'll never be like this terrorist!" to which the Sisters replied "We were not talking about this terrorist." The word terrorists in both sentences have been cut out. This was not originally in the Toon Disney edits but appeared after September 11, 2001.