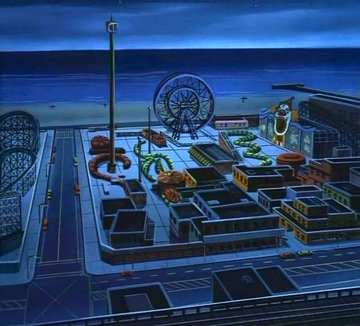 Coney Island is the site of a famous decades-old amusement park on the beach in Brooklyn, although somewhat tattered at the edges by 1996.

After Thailog broke Demona and Fang out of the Labyrinth in 1996, they lead Goliath and Talon to the funhouse at Coney Island. Rightly suspecting a trap, Goliath left and returned with the Manhattan Clan to overwhelm their enemies with numbers. When they entered the building they were attacked by not only Thailog, Demona and Fang, but also the clones of the Trio and Hudson and were quickly captured. Due to Thailog's attempt to kill Angela followed by his revelation of Delilah, Demona switched sides in the conflict, freeing the gargoyles and Talon and leading to a massive battle between the two groups throughout the amusement park. As Demona and Thailog battled atop a wooden roller coaster, a stray blast from the fighting mutates set the structure ablaze and both the gargoyles were enveloped by the flames and presumed dead. The clones were defeated and went to live with Talon in the Labyrinth and Fang was re-imprisoned there. ("The Reckoning")

Numerous rides and buildings suffered various amounts of damage during the incident, but the park repaired the damage shortly thereafter. [1]