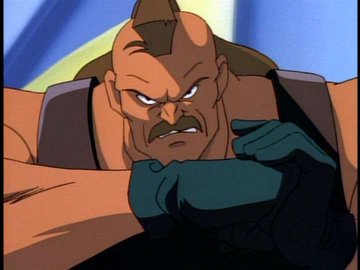 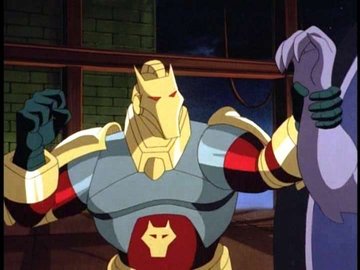 Dingo was a former mercenary and member of the Pack. He later became a member of the Redemption Squad. His real name is Harry Monmouth.

A mercenary of Australian origins, Dingo joined the Pack when Xanatos first set it up. Like its other members, he appreciated the fame and wealth that they received, but longed for some real adventure, and so joined the rest of the Pack in hunting down the gargoyles shortly after they first appeared in New York. ("The Thrill of the Hunt") They were defeated, however, and he temporarily fled to Europe afterwards.

Dingo returned to New York, however, and helped Coyote 1.0 break Jackal, Hyena, and Wolf out of prison on Rikers Island. They fought the gargoyles afterwards, but were once again defeated. ("Leader of the Pack") The Pack turned to crime in the period following, robbing banks, which increasingly came to disgust Dingo. When Xanatos offered to upgrade the Pack, Dingo alone refused to give up his humanity, opting merely for a high-tech suit of battle armor. Indeed, he was appalled by the way that Jackal, Hyena, and Wolf eagerly renounced their humanity to become a pair of cyborgs and a wolf-man. ("Upgrade") After the upgraded Pack's defeat, he parted ways with them permanently, and went back to Australia.

While in Australia, he accepted a job from Fox, keeping people away from the area where she and Anastasia Renard were testing the Matrix. However, his real interest in returning to Australia was to undergo some change for the better and break with his old disreputable past as part of the Pack. He consulted a local shaman at Uluru who gave him some helpful advice about going on Walkabout. When the Matrix began to run amok, Dingo joined forces with Goliath and his companions in battling it and finally entered the Dreamtime with Goliath to reason with the artificial intelligence. Dingo finally convinced the Matrix to stop reformatting the world in its quest for order, by pointing out to it that there was "another kind of order: law and order". The Matrix, intrigued, decided to join forces with Dingo to find out more about "law and order". Dingo and Matrix then went off to serve as a sort of Australian crime-fighting team, fulfilling Dingo's desire to become a real hero like the character he had played on the Pack TV show. ("Walkabout")

In time to come, Dingo and Hunter will develop a stormy relationship. They will eventually become a couple, and their descendants will still be around by 2198 - and at odds with the Castaways.

Dingo is a very fit man who along with his prowess in hand to hand combat is also skilled in a variety of weapons. For a time, Dingo utilized a powerful battle armor suit. This suit was eventually "assimilated" by Matrix, but Matrix can form new armor and other forms around Dingo and under Dingo's control by insering part of his Matrix into Dingo's spine. Naturally, this is unnerving for Dingo. Dingo has continued a relationship with his shaman mentor.

Harry Monmouth, Dingo's real name, is a reference to Henry V of England (1413-22), so called because he was born in the town of Monmouth in southern Wales. In Shakespeare's history plays, Henry IV Part One and Henry IV Part Two, Henry, then Prince of Wales as Prince Hal, spends most of his time consorting with Falstaff and his disreputable gang, to the despair of his father, Henry IV. However, after Henry IV dies, Hal, succeeding him to the throne, becomes a responsible king, severs his connections with Falstaff, and (in the succeeding play, Henry V) proceeds to win fame and glory by invading France and defeating the French at the Battle of Agincourt. Evidently, Dingo was given this name to draw a parallel between his earlier association with the Pack, followed by his break with them to become a genuine hero, and Prince Hal's association with Falstaff, subsequent break with him, and becoming a famous hero-king.