Difference between revisions of "Doll" 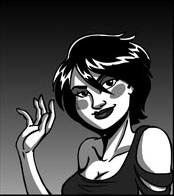 Doll is a member of Falstaff's gang.

Doll is named after Doll Tearsheet, a character in Shakespeare's Henry IV Part Two. A prostitute and Falstaff's mistress, she appears in Act Two, Scene Four, where she and Falstaff have dinner at the Boar's Head Tavern. At the end of the play, Doll and Mistress Quickly are arrested by the police in connection with a murder committed in the tavern; Doll tries to make things easier for herself by feigning pregnancy (apparently through stuffing a cushion under her clothes); the ploy fools nobody. In Henry V, she is described as in the hospital, suffering from syphilis.