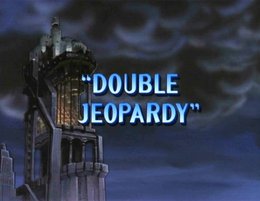 Thailog tells his captives of his plan to take the money and ignite oil barrels on the rig to kill them. After he leaves, Elisa is able to get out of her manacles, and uses the electronic disk that Thailog used to short out Xanatos's armor to offset the gas used on Goliath. Goliath tries to appeal to Thailog to give up his ways and join the clan, but Thailog tries to shoot him with his flare gun, resulting in a fight and a fire on the rig. Goliath is knocked off into the water while Thailog gets away unseen with the money.

Goliath's initial reaction to Thailog is similar to his reaction to seeing Coldstone for the first time in "Reawakening" though Goliath quickly recants his opinion in both cases.

Xanatos includes Demona, Macbeth, and Renard on his list of suspects behind Thailog's "kidnapping", even listing Renard twice (the second time comes when Owen reports that the oil rig named as the rendezvous for the ransom money is secretly owned by a large corporation, and Xanatos immediately asks, "Cyberbiotics?").

The dates given in Sevarius' video documentary about the cloning and education of Thailog are all dates of personal significance to Greg Weisman (the birthdays of himself and various family members, his wedding anniversary, etc.). [1]

Thailog arranging to receive the $20 million mirrors Xanatos sending himself the coin from the year 975 (in "Vows"), which was worth $20,000, and separating from his father afterwards. Whether this was intentional on Thailog's part or if he even knew of how Xanatos got his start is unknown.