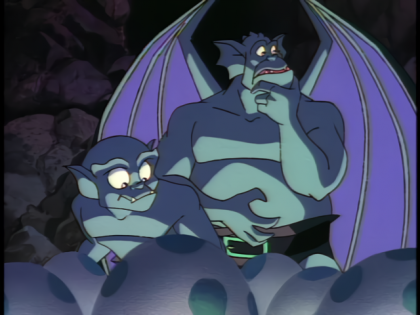 Eggs in the Wyvern Rookery.

Gargoyle eggs are created when a female gargoyle goes into heat and mates with a male gargoyle on or near the Autumn Equinox every twenty years, those ending in '7' (e.g. 927, 947, 967, 987, etc). The female gargoyle incubates the resulting embryo inside her body for six months while forming an egg around it. This egg is laid on or near the night of the Spring Equinox the following year (e.g. 928, 948, 968, 988, etc.). At the time of laying, the egg is soft-shelled and flexible, rather like a reptile egg. This aids in the laying process and presumably makes the birthing of the egg significantly safer for the female. All the eggs of the clan are then placed in the clan's rookery. The following morning, as the adult gargoyles turn to stone, the eggs in the rookery undergo a very similar process. The shells harden and assume an "egg-like" shape. [1] They remain in this state until they hatch ten years later; the embryos inside, however, transform back and forth between flesh and "stone" every day in the same manner as the adults. [2] Greg Weisman imagines that unfertilized eggs are likely to go through a process similar to menstruation. [3]

Under normal circumstances, a female gargoyle lays an egg three times in her life and a gargoyle beast will lay four. However, certain circumstances may cause a female to produce fewer eggs. Gargoyles and beasts usually take only one mate, so if a female's mate dies before her, she will not lay any more eggs. The London Clan has a strict limit of two eggs per breeding couple to avoid population growth that Knight's Spur can't support. ("Rock & Roll") It is possible that a gargoyle or beast living on Avalon could actually produce more than the usual 3-4 eggs due to the differences in the passage of time between the island and the real world. More information is currently unavailable. In the outside world, a gargoyle laying more than three and a beast laying more than four eggs in their lifetime would be exceedingly rare. Also rare is the case of twins being hatched in one season. [4] If twins were produced it is unclear if two hatchlings from one egg or the laying of two eggs in one season is more likely, though the former seems to be slightly more likely. [5][6]

There seems to be some care involved in maintaining healthy eggs. There is evidence that the Wyvern rookery was somewhat damp and it was in a cave. Eggs may require these damp, dark conditions to thrive. In fact, the last Wyvern clutch of eggs may have been set back from hatching a bit after being removed from the rookery and transported across Scotland in 994-995. [7] Princess Katharine remarked that the eggs must be occasionally turned or else they would crack too soon. Greg Weisman has also suggested that gargoyle eggs absorb thermal energy like an adult gargoyle does while sleeping. [8]

The eggs themselves are approximately a foot in diameter. They are a whitish color with several bluish-purple irregular spots. Eggs are indistinguishable from each other in the rookery. Even gargoyle beast eggs look identical or nearly so to the other eggs. The surface of the egg probably has a texture very much like the stone skin of adults.

After a ten-year incubation, the eggs hatch on or near the Spring Equinox. There is some evidence that they do not necessarily hatch at sunset, but rather at some point during the night or even several nights surrounding the Equinox. [9] At that point, the hatchlings, while slightly more independent and strong than human newborns (they can support their heads and start crawling quicker), are cared for and breast-fed by the adults. [10] Any eggs that do not hatch (due to "stillborn" or "bad egg" issues) are given a Wind Ceremony. [11]

Hatchlings quickly learn to walk on all fours, while walking upright takes much longer. Gliding can sometimes come before or after upright walking. [12]