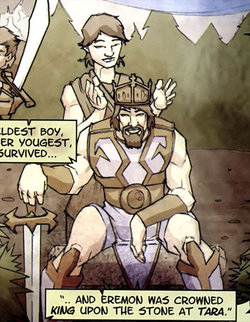 Eremon was a human and the eldest son of Gathelus and Scota. He became the first king of Ireland to be crowned upon the Stone of Destiny.

Eremon and his twin brother (whose name is presently unknown) were born to Scota on the isle of Samothrace. He and his brothers accompanied Gathelus and Scota on their travels, until they came to Ireland, where Scota was slain in battle. (Gathelus had already died earlier in Portugal.) After his mother's death, Eremon was crowned King of Ireland at Tara, upon the Stone of Destiny.

Eremon had seven younger brothers, but only one of them, Eber Finn, was still alive by the time of his coronation (five had drowned at sea, and one was slain in the same battle that Scota fell in).

Eremon (also known as Eochaid) was a legendary king of Ireland. It is said that he married a princess from the east named Tamar Tea Tephi, who came to Ireland in 585 B.C., bringing the Stone of Destiny with her. (Eremon and Eochaid are made separate characters in the comic book.)

Some legends make Eremon the leader of the Milesians (a mythical human tribe who settled in Ireland), when they first came to Ireland.