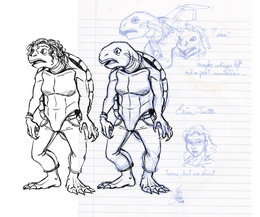 Erin was a human girl living in the Labyrinth in late 1996. In December of that year, Erin was abducted by Anton Sevarius and Fang and was injected with a mutagenic formula causing her to become a human-turtle mutate. After she was freed from Sevarius by the Redemption Squad, she returned to live in the Labyrinth.