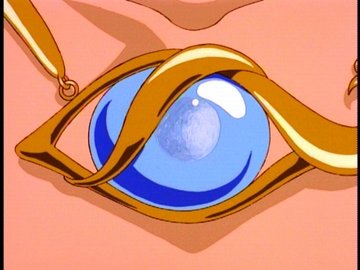 At some point before 975, the eye was transformed into a jewel, which increased the powers of whoever wore it; however, it would also corrupt them, in a manner reflecting the strengths and weaknesses of its wearer. Its detailed history is unknown until 1994. By this time, it had somehow come into Xanatos' possession. Xanatos donated it to the Museum of Modern Art, but afterwards had a Steel Clan robot steal it from there, partly to frame Goliath for the theft and thereby make the citizens of New York aware enough of the gargoyles' existence that he could manipulate the clan into giving itself up to him for its own safety, partly so that he could gain the leverage of having donated the Eye of Odin to the MOMA and still keep it for himself. ("The Edge") 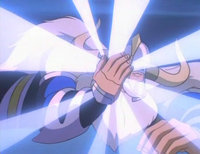 The Eye of Odin is one of only a very small number of concepts that originated in an apocryphal story to end up in the canon. The Eye first appeared in the Gargoyles video game as a powerful artifact created by Viking sorcerers for their chieftain to use as a magical weapon. The Eye caused problems for Goliath first in 994 when the Viking chieftain used it in an attack on Castle Wyvern, then again in 1994, when Demona used it to create an army of robots.

For a full history of the Eye's role in the video game, see Eye of Odin (Apocrypha).