Difference between revisions of "Fang" 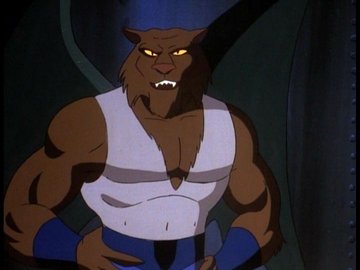 Fang was born in 1968[1] as Fred Sykes. In 1995, he was probably a homeless man recruited off the streets of New York City by Sevarius for Xanatos' Mutate Project, in which he was injected with a mutagenic formula combining his natural human DNA with genes from a cougar, a bat and an electric eel. Unlike the other original mutates, Fang liked his new form because of his great physical strength and his new abilities to fly and fire electric blasts from his hands, and had no desire to be changed back into a human. He lived at Castle Wyvern for a time, but after he and the others discovered Xanatos' true hand in their mutation, went on to live in the Labyrinth. ("The Lost", "Metamorphosis", "The Cage")

The name Fred Sykes was, at least in part, inspired by the character of Bill Sikes from Charles Dickens' Oliver Twist.[2]