Difference between revisions of "Finella" 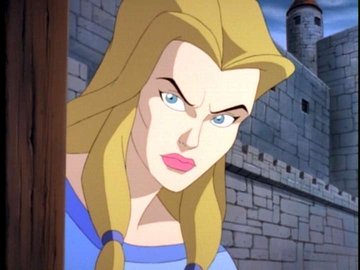 Finella was a young human noblewoman at Kenneth II's court in 995.

Finella was born in Scotland in 972.[1] When she was a young woman in 995, an aged King Kenneth fell in love with her, but she did not return his love, having given her heart to Constantine. Constantine pretended to return her love for his own purposes, but she did not realize this at the time. He duped her into arranging a secret meeting with Kenneth in the drying-house, to tell him that she wished to marry Constantine instead; this gave Constantine the opportunity to murder Kenneth and seize the throne.

After his coronation, Constantine declared that he would marry Princess Katharine, to strengthen his claim to the Scottish crown. Realizing now how she had been used by him, and furious at his betrayal, Finella helped Princess Katharine, the Magus, Tom, Mary and the gargoyle eggs escape from Constantine's court, in order to get revenge on her false lover. At the watery gate to Avalon, the Magus entrusted her and Mary with the Grimorum Arcanorum, to keep it out of Constantine's reach. ("Avalon" Part One)

Finella and Mary were pursued by Constantine's soldiers upon their return to Scotland for the next two years. Both were accused of murdering King Kenneth, kidnapping Princess Katharine, being in league with demon gargoyles and Finella herself was accused of turning to sin and Satan over "Kenneth's murder of her son" (when Mary asked about this, Finella fast denied having a son). In 997, Brooklyn met them on his first TimeDancer adventure and helped protect them. Unable to retrieve Goliath's half of the Phoenix Gate, they sought out Constantine's enemies and joined the Battle of Rathveramoen. Finella attempted to read from the Grimorum, claiming she knew Latin, but had the book taken from her by Brother Valmont. At the battle's end, Brooklyn asked her to guard the book just as the Phoenix appeared. She accepted it but asked that he take her and Mary with him. ("The Gate", "Tyrants", "Phoenix") The Phoenix took all three of them to the United States in the 1970s. Here, they eventually helped set up the alliance between Xanatos and Demona; presumably, Finella and Mary gave the Grimorum to Xanatos as well. Their fates are unknown beyond this point, though a woman looking very much like Finella was spotted at Xanatos' Masque party on Halloween, 1996. ("Bash")

Finella (also called Fenella, Finnguala, Fimberhele, Finele, or Sibill depending on the source) appears in the traditional Scottish chronicles, in connection with Kenneth II's murder in 995, although we do not know if she was an actual historical figure or a creation of legend-makers. Her own role in the murder in the semi-historical accounts is somewhat different than that ascribed to her in Gargoyles; here, she is portrayed as the vengeful mother of a man whom Kenneth had earlier slain, willingly participating in setting up his murder (the story is alluded to in "The Gate", though treated there as a lie of Constantine's). She was the daughter of Cuncar of Angus.