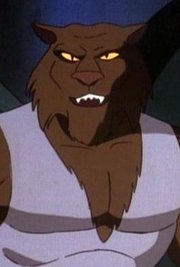 Fang is a Mutate who later becomes a member of the Redemption Squad. He was once a human, but was turned into a "flying bug-zapper" (as he calls the Mutates) by Doctor Sevarius under Xanatos' instruction. Though at first he peacefully joined Talon and the others in the Labyrinth he eventually tried to take over and rule there according to his own rules. His coup was unsuccessful and he was imprisoned. Aside from a brief escape thanks to Demona and Thailog, Fang remained as prisoner in the Labyrinth until the events that led to his recruitment for the Redemption Squad.