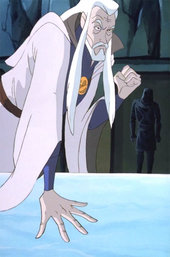 The Magus was a human wizard who was responsible for cursing the few remaining survivors of the Wyvern Massacre, locking them in their stone sleep until Castle Wyvern rose above the clouds. Trained by the Archmage in his youth, and in possession of the Grimorum Arcanorum, the Magus was a powerful user of magic. This great talent, however, did not prevent the tragedies of his life.

The Magus was never able to tell Princess Katharine, the ruler he loyally served, that he loved her. After cursing the remnants of the Wyvern Clan he also devoted his life to protecting the gargoyle eggs of the clan despite the sacrifices he would make to do so. Most of his life he spent on Avalon helping to raise "The Eggs" and watching Katharine and Tom grow closer. Without his magic he felt somewhat useless, but his training helped him to tap into the inherent magic of the island itself. This skill would allow him to play an important role in his final battle. (more...)