Difference between revisions of "GargWiki:Feature-24" 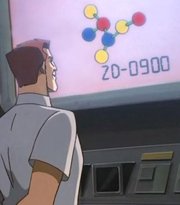 The CV-1000 Carrier Virus is a sophisticated viral agent designed by Anton Sevarius on orders from Dominique Destine. The virus, which was manufactured by Nightstone Unlimited, was seemingly harmless on its own, but could be combined with antigens (creating an infectious cure) or pathogens (causing an infectious disease). Demona's true motive for creating the virus was not to profit by it, but rather to use it in Operation Clean Slate.

Using sorcery, Demona combined the CV-1000 with the disinfectant D/I-7 to create a plague that would wipe out all intelligent life on Earth. Due to the actions of Goliath, however, Demona's scheme was foiled and the CV-1000 never fulfilled its purpose. A short time later, Sevarius would create the CV-1997 Carrier Virus with very similar properties. (more...)