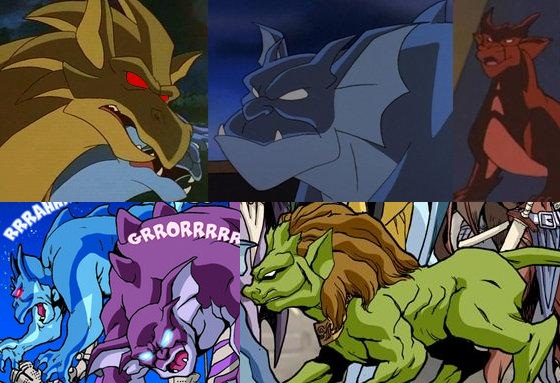 Note: The picture of Boudicca in the top left corner of this collage has been altered to make her eyes the correct red color rather than white as shown in the Gargoyles television series.

Gargoyle beasts are a species of animal closely related to gargoyles. They are generally found living among gargoyle clans, as companions and "watch-dogs."

Gargoyle beasts originally lived in the wild, but began to be domesticated several thousand years ago. [1] By 1 A.D., all gargoyle beasts were attached to gargoyle clans. [2] Beasts are considered members of the clan, though there is a clear idea that they are a separate species.

The gargoyle beast species has suffered decline over the centuries alongside the gargoyles, despite their higher and faster breeding rate. The general evidence that we have indicates that beasts are even rarer than gargoyles. There has long been a shortage of beasts among many clans, particularly throughout the British Isles. [3] Indeed, at least one clan, the London Clan, has none as of 1996. ("Rock & Roll") They are already extinct in the wild and their numbers seem to be even lower than that of gargoyles. [4] Fortunately, the Xanadu Clan have taken it upon themselves to protect and breed these rare animals, and their work may prove critical to saving the species. [5]

The earliest known historical gargoyle beast is the "Hound of Ulster", a companion to the ancient Irish hero Cu Chullain at the beginning of the 1st century A.D. and a member of the Irish Clan. [6][7] Demona's Clan had at least three beasts at one point in time, including Bronx's biological mother and father. ("Tyrants") The gargoyle beasts of the present include Bronx of the Wyvern Clan, now of the Manhattan Clan in New York, and Boudicca of the Avalon Clan. Brooklyn acquired a gargoyle beast from the Xanadu Clan on his TimeDancing journeys, named Fu-Dog, who joined the Manhattan Clan upon Brooklyn's return. ("Phoenix") [8] There is also at least one beast known to live among the Ishimura Clan, and two other beasts besides Boudicca dwelling on Avalon. ("Bushido") [9]

Although most gargoyle beasts look roughly dog-like in appearance (Fu-Dog, whose features are lion-like, is an exception), they are not dogs at all. They are, in fact, about as closely related to gargoyles as chimpanzees are to humans. Gargoyles and gargoyle beasts are the only living members of the biological class of "gargates."

Gargoyle beasts are quadrupedal and wingless, though they may retain some vestigial wing bones not visible on the surface. [10][11] They cannot speak, communicating only with animal vocalizations, particularly barks and growls. Unlike gargoyles, they have entirely white or red eyes, without visible irises or pupils. Males have white eyes while females have red (this is properly displayed in the SLG comic, not in the TV show).

Gargoyle beasts are not considered pets but fellow warriors and the relationship between a gargoyle beast and the rest of the clan is closer to that of equals than one of "master" and "pet". [12] Though not quite as intelligent as gargoyles, gargoyle beasts appear to be pretty smart. Bronx has demonstrated the ability to understand simple commands that can mean different things under different circumstances ("help" someone, for example). Bronx is also perfectly capable of assessing a situation himself and deciding on what action to take without being told. Additionally, he seems to be able to determine what levels of force are necessary, attacking robots and more monstrous foes at full force, while holding back with more vulnerable targets. His intelligence has its limits, though. In "City of Stone" Part Four, Bronx did prevent Demona from smashing the stone Elisa, but he backed off afterwards and made no attempt to attack Demona again, even as she explained her intention to kill the rest of the clan and Xanatos. What she said was beyond Bronx's understanding, and since her tone wasn't hostile and he couldn't tell that she was doing anything wrong, he didn't try to stop her.

Like gargoyles, beasts turn to stone by day and come in various colors, and their appearance varies somewhat between individuals. Also like gargoyles, the females are fertile once every twenty years, and each lays a single egg at a time, which takes ten years to hatch. [13] They reach maturity more quickly than gargoyles, but otherwise enjoy the same life-span, and thus can lay more than three eggs in a lifetime. [14] Gargoyles beasts show the same loyalty to their mates that gargoyles typically do. A beast generally takes only one mate during his or her lifetime. If a beast dies, his or her mate will generally not have another mate. [15] They are loyal, formidable animals, who battle devotedly alongside their clan in its defense, and can strike terror into the hearts of their enemies.

It is likely, judging from the reports of the "Hound of Ulster", that gargoyle beasts are in some way the original of the "black dog" legends of the British Isles, but further data on this is as yet unavailable.

Just as the gargoyle species is based on the winged guardian statues in European architecture, the gargoyle beasts are based on the wingless gargoyle or "chimera" statues. Wingless guardian statues are also found in various civilizations around the world, and are sometimes still raised upon modern buildings. In addition to statues of fantastic beasts, European architecture also features realistic-looking stone lions.