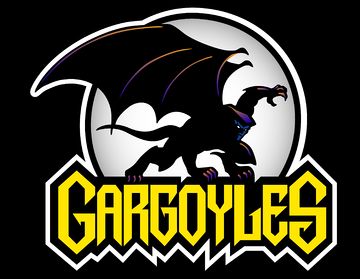 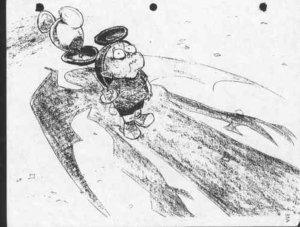 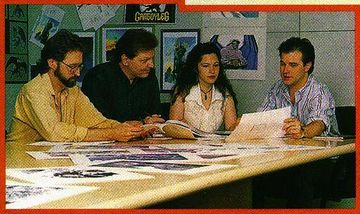 Both this series and its spin-offs were initially continued in the Gargoyles comic series produced by Slave Labor Graphics from 2006-2009.

In 2022, new canonical comics will be published by Dynamite Entertainment.

After the show's tenth anniversary in 2004, other products have been made available. In addition to the canonical SLG comics, the original series has been released on DVD and sculptures of Goliath have been created by both Electric Tiki and Bowen Designs. Hot Topic has also sold Gargoyles related t-shirts on-and-off since 2008. [1][2]

In 2015, Joe's Books announced its intention to release Cinestory comics based on the original series. By 2017, the plan was quietly shelved. In 2018, Funko Pop released more than a dozen figures. These included chase variants and key chains.

Following the original series' inclusion to the Disney+ streaming library in November 2019, there has been to a near-continuous line of new products and collectibles available to fans. NECA debuted their own detailed action figures in 2021. NECA's subsidiary, Kidrobot, released Gargoyles Phunny Plushes the same year. Also in 2021, Quantum Mechanix began releasing their own line. Target also released a new board game that hit their shelves, even a new pin [3]. Additional figures from other makers are set to be released.