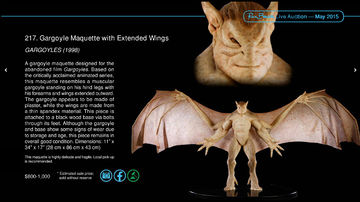 A Gargoyles Live-Action Feature Film from Touchstone Pictures has been in development on-and-off for the last twenty years.

As early as 1995, Disney has been developing a Gargoyles live-action feature film based on original television show. The project has been shelved, having changed writers and executives several times. No actor has ever been attached to the film. [1] From the earliest days of development, the live-action film has always had its own separate continuity from the television series, and is therefore likely that if a movie is ever made it would be non-canonical.

At some point, make-up and visual effects artist Rick Baker was attached to the project and in 1998 designed a maquette of a gargoyle (presumably Goliath). [2][3] During this time, character sketches were also designed by artists Bryan Spaulding Fuller and Carlos Huante. [4][5]

In 2010, it was announced that Disney was developing a live-action film about medieval gargoyles waking up in modern times, but officially unrelated to the television series Gargoyles. [6][7] Three years later, the film remained in development, having changed writers at least once. [8]

Director Jordan Peele expressed interest in 2018 on working on "a new version of Gargoyles." [9] The Ankler's Richard Rushfield has noted, however, that given Disney's well-established and successful tentpole franchises from Marvel, Lucasfilm, and PIXAR, Gargoyles "isn’t exactly the corner of the vault they’ve been digging through." (A factor Greg Weisman has also written about.) [10][11]

When Touchstone originally expressed interest in the project, they went to Gary Krisel, President of Walt Disney Television Animation. Gary Krisel suggested that they develop the film with a couple of writers who were familiar with the television series. Touchstone soon contacted and made Greg Weisman and Michael Reaves co-producers for the film. [12] The two submitted a treatment (a general outline for the story) which was ultimately rejected. The project then changed hands at Touchstone and soon after Gary Krisel left Disney and according to Greg both he and Michael were "swept aside" on the project. They remained co-producers and were told they'd still be consulted, but in actuality neither ever were. [13] Michael Reaves has described their participation as basically being "Here's some money, now get off the lot." [14]

Dean Devlin was also a writer for the film in 1996, but Touchstone was also unsatisfied with his script. [15][16] In 1998, all Greg Weisman knew about the production was that the film intended to include the characters Goliath and Elisa Maza. [17] Instead of rewrites, Touchstone continued to bring in new writers (including Jim Kouf) to start from scratch. [18][19]

Simon Kinberg (who would later work with Greg Weisman on Star Wars: Rebels) was revealed as a writer in the summer of 2000 and with plans to turn in a first draft in October. [20] At this point it was believed that Kinberg was (at the least) the sixth writer for the project. [21] Neil Gaiman was also approached, but he declined. [22]

Touchstone was still struggling to find the right screenplay in 2001. [23] Two years later it was believed that after seven years or so of actively pursuing a script, Touchstone officially put the film on hold. [24] Besides being unable to move forward with a script, Touchstone's executives were apparently now uninterested in the property. [25]

At the 2006 Gathering, Greg Weisman and Michael Reaves mused that while Touchstone liked the name Gargoyles, they weren't that interested in the actual property. [26]

While Greg Weisman has never read any of the scripts that Touchstone turned down, he has revealed tidbits on his own treatment with Michael Reaves. According to Greg, their story was basically "Awakening" but with a strategy of creating a simpler continuity that still focused on Goliath & Elisa relationship. [27] Other details from the treatment include: [28]