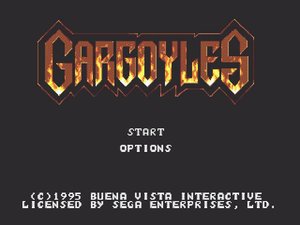 Gargoyles: The Video Game was a video game released for the Sega Genesis in 1995. The player controls Goliath as he battles Demona and the Eye of Odin. A plot summary is included with the manual.

In the year 994 AD, a power-crazed Viking chieftain orders the sorcerers in his command to create a weapon of ultimate destruction that he can use to conquer the world. Through their mystic arts they bring into being an evil artifact of unimaginable power: the Eye of Odin. So terrible is this device, it corrupts all who dare possess it. The Viking chieftain uses it to wage war upon an unsuspecting Northern Europe and the British Isles.

The Viking raiders find little resistance until they reach Castle Wyvern in Scotland. Defending the castle is the guardian known as Goliath, the powerful leader of the ancient race of creatures known as gargoyles. He possesses stone-crushing strength, huge bat-like wings and can climb the sheer rock walls and ceiling of the castle by digging his razor-sharp talons into their surfaces. In Goliath, the Vikings have found a fearsome opponent.

Secreted below the castle are the subterranean chambers of the Rookery which contain the unhatched eggs of Goliath's clan. Should he fail, his entire race is doomed to extinction.

Despite his defeating the Vikings, Goliath is blamed for the ruin of the castle and falls under a curse. He is turned into a stone statue, doomed to remain that way until Castle Wyvern rests above the clouds.

A thousand years later, an ancient edifice graces the modern day Manhattan skyline. Castle Wyvern has been rebuilt atop a massive skyscraper.

The curse is broken. Goliath awakens in a new world and for the first time in a millennium, a gargoyle rules the night.

Goliath becomes aware of a familiar evil presence in this bizarre land -- an evil he has fought before. Somehow, the Eye of Odin survived the centuries with Goliath and leads a new type of army on a path of destruction.

Goliath must chase the Eye of Odin across the rooftops of the sprawling metropolis, battling the mechanized terrors that have been programmed to destroy him. The Eye of Odin must be destroyed and only Goliath possesses the knowledge and the power to succeed -- and survive. 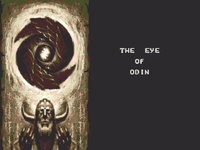 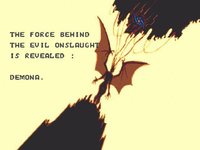 Demona and the Eye of Odin

In the Days of Vikings

Evil Awakens - The story begins at Castle Wyvern in ancient Scotland. Goliath, the lone sentry guardian the battlements, must repel the Viking invaders at all cost! He dodges arrows and axes, engages enemies in claw-to-hand combat and smashes his way through the very castle walls in order to get to their sorcerous leader.

The Sorcerer Strikes - If successful defending the castle, Goliath descends into a secret courtyard which hides a powerful sorcerer. This magician was instrumental in creating the Eye of Odin and wields considerable power! The sorcerer uses searching lightning bolts and a mighty hammer in his attacks. Goliath must defeat this twisted mage to finally drive the Vikings from the castle.

Siege of the Rookery - Enraged at their loss at the castle, the Vikings descend into the depths of the gargoyle Rookery. There they seek to destroy the developing gargoyle eggs to wreak revenge on Goliath and his kind. Amid an inferno of lava, fire and volcanic energy that incubates the eggs, Goliath battles to expel the Vikings before they destroy the last hope of his race.

Odin's Wrath - The once-defeated sorcerer calls upon the Eye of Odin to grant him enough power to defeat Goliath. Merging with the ancient artifact, the evil Magician is mutated into a hammer-wielding Demi-Sorcerer -- a creature of awesome might. His hammer returns to him when tossed and impacts the ground so hard that sparks fly! This is Goliath's greatest foe in the Viking era. To lose now is to condemn the race of gargoyles to extinction.

In the Realm of Modern Manhattan

Stone and Steel - Goliath awakens in a strange new world. His enemies are not even alive (as he knows life), but mechanical mockeries of other creatures. Impossible as it may seem, someone has resurrected the Eye of Odin and is using it to begin a reign of terror in this new age. Goliath pursues the Eye of Odin across the city's rooftop by scaling walls, leaping from building to building, swinging from light posts, clinging to fire escapes and breaking through skylights and weak construction. But Goliath himself is hunted -- by dangerous robots controlled by the unknown force that now wields the Eye. As Goliath faces this new and more powerful army, he realizes that although the time has changed, his mission remains the same: to stop the Eye of Odin and those who would unleash its evil upon humanity.

Free Fall - The Eye of Odin creates the Widow Chamber -- part spider, part elevator, and all evil. Goliath must avoid being knocked into the chasm below as he fights to reach the Eye of Odin. This powerful creature has a single goal: the fall of Goliath! 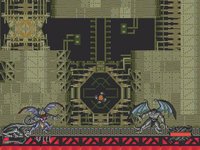 Subterranean Terror - After Goliath's struggle with the monstrous elevator, he finds himself beneath the city. He must now contend with numerous robotic foes on a runaway subway train. Goliath can smash through the rooftop skylights of the subway cars to land inside as well as crash through the connecting doors. However, he must beware of the many holes torn in the floors by stray robot plasma bolts. Goliath also gets to meet one of the Eye of Odin's greatest creations, the Thor 3000.

Ambush - From the engine room of the subway train explode the vicious Steel Clan. Goliath must face wave after wave of these aerial arsenals as their evil leader hovers nearby. Should its minions be defeated, the Crimson Clan will try to make sure it's the end of the line for Goliath.

The Forge - Goliath has discovered the spawning ground of the Eye of Odin's deadly machines. He now realizes that some living force must have guided the Eye of Odin to create this labyrinth of metallic death. As he scours the platforms suspended above molten steel, he must fight his way through the elite robot guards that are created almost as quickly as he can dispatch them.

The Final Fury - Goliath has waged a non-stop war against the foe of humanity who has used the powerful Eye of Odin in the modern age to create the hideous killer robots. Can Goliath defeat the only being who has ever been able to master the evil Eye of Odin? 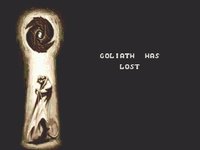