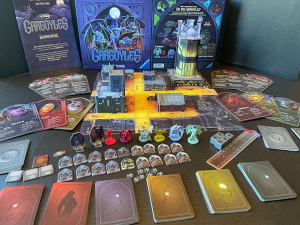 Disney's Gargoyles Awakening Board Game is a cooperative, scenario-based game in which players work together as the Manhattan Clan to face off against evil mastermind and billionaire David Xanatos and his army of Steel Clan, treacherous and magic-wielding Demona, unhinged cybernetic gargoyle Coldstone, and other villains from the show. Playing as Goliath, Lexington, Brooklyn, Hudson, Broadway, or police detective Elisa Maza, the player will glide through a 3D cityscape of Manhattan as they fight to save the city.

Turns in Disney Gargoyles Awakening are divided into three phases. In the Hero phase, the Heroes move and act. In the Villain phase, Xanatos, Demona, and their minions act. Finally, in the Refresh phase, players draw new cards.

At night, the gargoyles come to life to defend their home. On your turn, you'll perform the number of actions shown on your Hero's placard. You can either move, attack, or use your special ability. For example, Elisa Maza has an attack range of 3 while using her basic action (as opposed to a range of 1 for most players), and she may move up to two spaces for free after attacking.

Normally, you'll use one action point to move from one space to another. To scale buildings, you'll need to spend two points to move a single space. On the othe hand, you can glide (not fly) farther if you start from a rooftop.

To attack, you'll need to consider your strength (how many attack dice you roll) and range (how far away your target can be). Each character has a base range (normally 1) and strength but will also have a hand of cards with specific attacks and actions, which may have different strengths and ranges. Each character's deck is designed with their abilties in mind. For example, Broadway's "Air Stomp" makes use of his size, while veteran warrior Hudson has "Parry."

Some attacks also include the ability to stun minions, which blocks the minion's ability from activating during that turn. Of course, Xanatos and Demona are immune to stun effects.

Finally, all Heroes have a unique skill that can be activated by Skill tokens acquired throughout the game. For example, Broadway can choose to heal one of his fellow Heroes, while Goliath can make the active Hero stronger.

After the Hero has made their moves, the Villains attack! Cards from the Villain deck will activate Demona, Xanatos, and their minions, causing them to move and attack. In addition to dealing direct damage, the Villains can make the Heroes discard a number of their cards, move Heroes closer to a villains' attack range, and even make the Heroes draw another Villain card. Be careful; if any Hero's health is reduced to zero, the game is lost!

As Villain cards are drawn, you'll add up the number of crescent moons revealed on the cards. Once you reach four moons, the moon sets, and the sun rises. When this happens, players skil the Villain phase, moving on to resolve the scenario's Daytime effects, like allowing Xanatos or Demona to move, healing their damage, activating minions, and more. Heroes are most vulnerable durin this time.

Disney Gargoyles: Awakening offers four "episodes" for players to explore. In all scenarios, players lose if any single gargoyle or Elisa Maza falls.

In Reawakening, the episode recommended for beginners, you'll battle Demona and Xanatos at the same time. You'll also have to deal with Coldstone. Rebuilt with machine parts, Coldstone's mind is shattered. When he remembers who he is, he will ally with the gargoyles to fight against Xanatos and Demona. If not, he'll battle the Manhattan Clan just as ferociously. In the game, this is represented by Coldstone's "blue side" and "red side" respectively. To win, players will need to flip Coldstone to his blue side and defeat both Xanatos and Demona.

In Temptation and Magic, the trecherous gargoyle Demona has seized an ancient book of magic - the Grimorum Arcanorum. To win, the gargoyles will need to battle Demona, retrieve the tome, and fight those Demona has enthralled with magic.

Xanatos's technology is cutting edge at the time. To defeat him in Information Warfare, the gargoyles will need to retrieve three floppy disks containing information critical to Xanatos' plans and turn them into the Police Clock Tower on the board. Meanwhile, they will have to contend with the Steel Clan and Xanatos himself. Players lose Information Warfare not only if any Hero is defeated, but also if Xanatos manages to gather all the disks within his headquaters at the Eyrie Building.

Battle With the Steel Clan

In Battle With the Steel Clan, one player takes the role of Xanatos and controls the Steel Clan. This player will attempt to defeat a single Hero (either a gargoyle or Elisa Maza) or destroy the Police Clock Tower to win. Meanwhile, the gargoyles must defeat Xanatos.