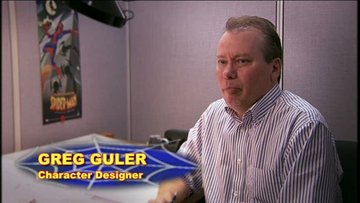 Greg Guler on The Spectacular Spider-Man: The Complete First Season DVD. Not in Hawaii, thankfully.

Greg Guler is an artist who worked on the Gargoyles television series and was also the Art Director and cover artist of the Gargoyles and Gargoyles: Bad Guys comic book series'.

Guler has drawn comics since High School but but it wasn't until the late '80s that he found anyone who was willing to pay him for it. Since then he has worked for Americomics, First Comics and DC. He reluctantly left the comic industry to work in animation and currently is employed at the Walt Disney Company. He and Greg Weisman first became acquainted when both were at DC Comics, but first collaborated during the development of Gargoyles. They've worked together on and off ever since.

Guler created the inspirational designs for many of the main characters on Gargoyles, specifically Goliath, Demona and Elisa Maza, and was the lead character designer on the series' second season. He's also worked on Darkwing Duck, Aladdin, Quack Pack, The Mighty Ducks, Lilo and Stitch: The Series, Johnny Bravo, Tarzan, Team Atlantis, Buzz Lightyear of Star Command and The Spectacular Spider-Man, as well as a number of feature films and DVDs.

More recently, Guler pencilled the interior art for Gargoyles #10, "The Gate" and is one of the character designers behind the comic mini-series, Mecha-Nation (for which he helped develop the original show pitch with Greg Weisman and Vic Cook).