Difference between revisions of "Halloween" 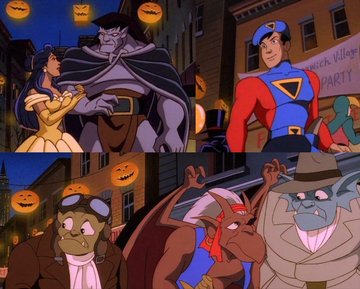 Elisa, Goliath, Vinnie and the Trio on Halloween 1995 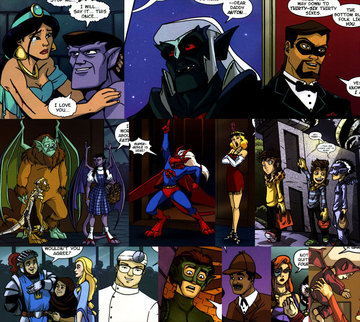 Halloween is a holiday celebrated on the night of 31st of October. Though traditionally associated with the spirits of the dead, the modern celebration of Halloween is mainly centered on costumes and candy.

Halloween is a very important holiday for the Manhattan Clan. Because humans in Manhattan celebrate the holiday by dressing up in costumes, the gargoyles can freely walk the streets and interact with humans without causing a panic. Since arriving in Manhattan, the clan has participated in two Halloween celebrations, the first in 1995 and the second in 1996.

It is unknown whether any of the other gargoyle clans who live in countries where Halloween is celebrated take advantage of the night and go out among the costumed revelers.

Elisa helped the Trio to mail-order their Halloween costumes in early October. The costumes were delivered to Elisa five days before Halloween. On October 30, while picking up her own Halloween costume, Elisa encountered the werefox for the first time. On Halloween, Elisa, Goliath, and the Trio attended a Greenwich Village block party. Goliath and Elisa later aided Xanatos in removing the Eye of Odin from Fox, transforming her from the werefox back into her human form. ("Eye of the Beholder")

Although Goliath attended the block party with Elisa and the Trio, he opted not to wear a costume, and therefore went dressed as himself. Hudson and Bronx stayed home at the clock tower and did not dress up, as far as anyone knows.

By Halloween 1996, the existence of living gargoyles in Manhattan had been revealed. Because of this, gargoyles became the most common costume in that year. Many of the costumes also happened to resemble specific members of the Manhattan Clan, particularly Goliath and Brooklyn, although others were more generic.

David Xanatos organised a Halloween masquerade ball at the Eyrie Building on Halloween. He intended for the gargoyles (now back living at Castle Wyvern) to attend, so that they could be introduced to the human guests, who would believe the gargoyles were humans in costumes and would therefore come to appreciate them as individuals before learning the truth. This time Fox obtained costumes for the clan. At the last minute, Xanatos was called away to another party at the White House, and the masque in the Eyrie Building was hosted primarily by Owen Burnett. Hudson and Bronx once again declined to join the festivities, but they did celebrate the holiday with Hudson's friend Jeffrey Robbins.

Though the Xanatos family's guests still believe the gargoyles are just humans wearing one or two costumes, the holiday is largely an unhappy one for the clan. Elisa tells Goliath that she thinks they should break up and that both of them should start dating other people. Goliath half-heartedly visits the Labyrinth and asks Delilah to attend the Masque with him. Elisa chooses Officer Morgan as her date. Thailog later arrives at the castle with the clones in tow, seeking to reclaim Delilah. While they argue over Delilah's fate, Thailog stabs Goliath. The rest of the clan battles Thailog and the clones, giving Thailog the opportunity to obtain DNA samples from all of them. Delilah arrives and expresses her anger with both Goliath and Thailog for trying to use her for their own purposes. Malibu, Hollywood, and Burbank choose to remain with Delilah, but Brentwood leaves with Thailog. Elisa and the injured Goliath confess their love for one another. ("Invitation Only", "Masque", "Bash")

Once again, Goliath and Hudson chose to attend their respective functions without wearing costumes, although other guests tended to believe they were wearing very convincing gargoyle costumes. Xanatos and Thailog both wore simple, black domino masks in lieu of full costumes; Fox carried a carnival-style mask on a stick that is the same shape and colour as her fox-head tattoo and which she holds over her right eye.

The name "Halloween" is derived from "All Hallows' Eve", referring to the fact that it fell on the night before All Hallows' Day, or All Saints' Day. It may have evolved from the ancient Gaelic festival of Samhain, during which ancient Gaels would take stock of their crops and livestock in preparation for the coming winter. The Gaels also believed that the spirits of the dead could cross over into the world of the living on this night, causing all kinds of havoc. The Gaels would erect bonfires and burn the bones of their slaughtered livestock to keep evil spirits at bay. They would also don costumes and masks to confuse the spirits. These ancient customs later inspired the modern practice of trick or treating, in which children dress up in costume and go door to door collecting candy from their neighbors.