Difference between revisions of "Katana" 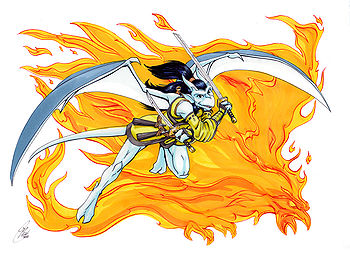 Katana and the phoenix as drawn by Karine Charlebois

Katana is a female gargoyle originally from the Ishimura Clan of feudal Japan, and later a member of the Manhattan Clan. [1]

Katana was hatched at an unspecified time during Japan's feudal period. [2] Most likely she was trained in Bushido and learned to wield a Japanese sword, a katana, from which she derives her name. Several decades after her hatching, Brooklyn arrived in Ishimura on his TimeDancer travels (specifically between two extended stays in the far future), at which point the Brooklyn and Katana were the same age, biologically. [3][4] Katana joined Brooklyn in the TimeDance; she chose to join him, but it was a tough choice. [5]

At some point, Katana and Brooklyn became mates and had two biological children: Nashville and an egg as yet unhatched in 1997 that they call Egwardo, which will hatch into their second child Tachi in 1998. [6][7][8] It is currently unclear whether or not Brooklyn and Katana will have a third biological child. [9]

Katana is a female gargoyle with pale blue skin, black hair, a beak, and some anatomical peculiarities common among the Ishimura Clan, such as paired horns, and a reduction in wing, finger and toe digits.

She is very protective of her egg. She became somewhat defensive when Angela asked to hold it. She also wears a back-pack and takes the egg with her at all times, including into battle.

Katana was already known by that name when she first met Brooklyn. [10]