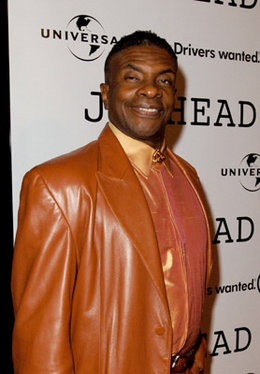 Keith David is the voice actor who played Goliath and Thailog on Gargoyles. He's been a frequent guest of the Gathering of the Gargoyles.

Keith David was born in New York City's Harlem district and raised in East Elmhurst, in the Queens section of the city. As a child he realized he wanted to act after playing the cowardly lion in his school's production of The Wizard of Oz. He later enrolled in New York's High School of the Performing Arts and continued his studies at Juilliard. After graduation he was hired as an understudy for Tullus Aufidius in William Shakespeare's Coriolanus. In 1992 he received a Tony Award nomination for Best Supporting Actor in a Musical for his role in the Broadway play Jelly's Last Jam.

Keith voiced The Big Man in the first episode of The Spectacular Spider-Man, and voiced the character later in the radio play "Religious Studies 101: A Handful of Thorns". He also voiced Mama in the English dub of 3x3 Eyes and Mongul on Young Justice.

He also voiced Hades for Kidd/Hero, another project developed by Greg Weisman and Vic Cook. [1] His likeness was the model for the character Wade Eiling in The Fall and Rise of Captain Atom, a 2017 comic miniseries written by Cary Bates and co-plotted by Greg Weisman. [2]

Keith's impressive filmography can be seen at his IMDB listing.