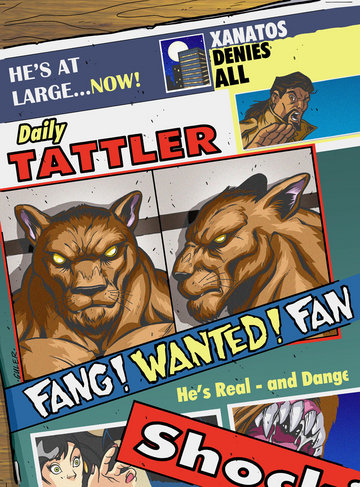 'Redemption,' Chapter 4: Louse. How many mutates does it take to screw in a light bulb? Well, if you're Dr. Sevarius and Fang, the answer is: 'Never enough!' Can Hunter, Yama, Dingo, and Matrix stop our mad scientist's nefarious plan for the city of Manhattan?"

"Louse" continues the story of the Redemption Squad, taking one of the darkest turns in the Gargoyles Universe to date. Hunter, Dingo, Matrix, and Yama are pitted against Sevarius, who's continuing his corrupt genetic experiments - but has come up with an even more ambitious scheme than before. This time, he's decided to test his new carrier virus on the crowd assembled at Times Square on New Year's Eve, ensuring "a wonderful variety of Mutates", as he puts it.

I had suspected that Sevarius would be carrying out such a scheme after noting that #3 was taking place on New Year's Eve; while the notion of a super-villain unleashing something dreadful upon a crowd eager to ring in the new year at Times Square has become almost cliched, that would fit Sevarius's character perfectly. And the story makes it clear that Sevarius is going over the top, particularly when Fang (who's serving as Sevarius's henchman) grumbles about how Sevarius *had* to have the virus released at exactly midnight.

But, as I said in the opening paragraph, Sevarius's experiments are darker than in "Metamorphosis". For one thing, now his victims include children (Benny and Erin). Even worse, one of his victims, Tasha, commits suicide after realizing that Sevarius has no intention of curing her. The remaining new Mutates will find sanctuary at the Labyrinth, but their plight is still clearly worse than Talon's and Maggie's was.

Sevarius is also ready to try mutating Hunter and Yama, though fortunately Dingo and Matrix thwart him in time. He plans to use gargoyle DNA (from Angela, to be precise) on Hunter (whose horrified response indicates that she hasn't completely freed herself from her old prejudices), and human DNA on Yama (though we don't learn whose it was from).

Fang is his usual obnoxious, loud-mouthed self; he stoops to his lowest when he tries making a joke about Tasha's death - and almost gets decapitated by a disgusted Yama. Hunter stops Yama in time - and Fang is enlisted on the Redemption Squad, to the alarm of everyone else (except possibly Matrix, whose response is not shown).

Dingo and Matrix continue their interplay introduced in #1; Matrix argues near the start that if Dingo had not rushed off so impatiently, they might have achieved their goals much sooner, and then goes scouting ahead in the form of many different strands, each venturing down a different tunnel. Later, Matrix removes himself from Dingo to stop the virus from being released, resulting in Dingo almost falling to his death before Hunter saves him. When Dingo protests afterwards, Matrix says "I assumed you did not want to be mutated, and I calculated Hunter could save you." The partnership clearly still has its problems.

There are other great touches: Benny curling up in his shell in response to Tasha's suicide, and Dingo unwittingly repeating himself each time he's zapped by Fang. All in all, this makes a fine continuation of the Redemption Squad's story.

The front cover is an excerpt from the Daily Tattler, mentioned in the television series in "The Thrill of the Hunt" and "Hunter's Moon" Part One.

Sevarius recognizes Hunter from their previous encounter in "Hunter's Moon" Part Two, and even mentions her then-alias of Robin Correy.

Benny and Erin are named after Greg Weisman's children. The real Benny and Erin chose the mutated forms of their comic book counterparts, leading Greg Weisman to create the armor theme around their choices. [1]

The word "gargate" finally becomes canon rather than canon-in-training in this issue.

Sevarius's sample of Angela's DNA came from his extracting genes from her in "Monsters" (the same extraction which led to his discovery that she was Goliath's biological daughter). 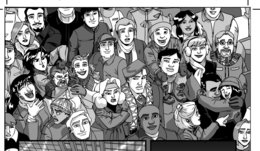 Brendan and Margot are among the crowd in Times Square (bickering as ever), as are Terry and Tri Chung. Many real-life Gargoyles fans make cameos as well: Jennifer L. Anderson, Stephanie Lostimolo, Eric Tribou (also known as Gorebash, Station Eight's administrator), Cindy Kinnard, and Seth Jackson.