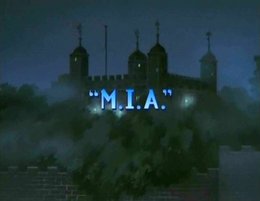 "M.I.A." is the forty-third televised episode of the series Gargoyles, and the thirtieth episode of Season 2. It originally aired on December 21, 1995.

Leo and Una blame Goliath for the loss of their friend Griff and kidnap Elisa, Angela, and Bronx. Goliath uses the Phoenix Gate to travel back to 1940 during the Battle of Britain to find out what happened to Griff. After several close calls, Goliath realizes that Griff never returned home in 1940, so he uses the Phoenix Gate to bring Griff and himself to the present time. Leo and Una realize it was their own guilt that was to blame for their animosity towards Goliath.

The London Clan begins taking a greater part in protecting its community.

The London Clan is introduced in this episode - it is the first gargoyle clan known to have survived to the present day that did not have its origins in the Wyvern Clan. Other similar clans are introduced in "The Green" and "Bushido".

Leo, Una and Griff appear for the first time. Griff will reappear in "Pendragon", and he and other members of the London Clan are shown in "The Rock", "Rock & Roll", and "Rock of Ages". Leo and Una appear briefly in "Rock of Ages", but without speaking roles.

Goliath uses the Phoenix Gate, even though he had promised to prevent it from being used in "Avalon Part Three". In "Eye of the Storm" he similarly uses the Eye of Odin himself rather than giving it to Odin.

The notion of Goliath taking part in the Battle of Britain was a very early idea in Gargoyles (once it was redesigned as a serious adventure series rather than a comedy). Originally, the plan was for Goliath to be awake during the thousand years when the rest of his clan was in stone sleep, remaining in Castle Wyvern and guarding them for most of that time - but when the Second World War erupts, Goliath, realizing the gravity of the situation, fights alongside the RAF to prevent the Germans from conquering Britain and endangering Castle Wyvern and its sleeping gargoyles. When this notion of how Goliath spent the thousand years between 994 and 1994 was dropped, Greg Weisman still felt enamored enough of the notion of Goliath participating in the Battle of Britain that he looked for another way to allow for his presence there, and found it in the Phoenix Gate.

One of the RAF pilots in the Battle of Britain sequence (identified in the dialogue) is Douglas Bader, an actual historical figure who took part in the defense of London during the Blitz, and whom Greg Weisman had even met as a boy. (Bader is another human in the series who, after the initial astonishment at seeing gargoyles has worn off, readily accepts them, leading to a particularly great scene where he saves Goliath and Griff from a German bomber and then exchanges a thumbs-up with Griff.) The animators erred, however, in having him fly a Spitfire in this scene (he actually flew a Hurricane during the Battle of Britain).

The notion of Leo, Una, and Griff looking like a winged lion, unicorn, and griffon respectively came from English gargoyle sculptures with similar appearances.

Leo and Una resemble a lion and a unicorn, which are the heraldic symbols on the Royal Coat of Arms of the United Kingdom. The lion and the unicorn represent England and Scotland, respectively. The symbols have made their way into popular culture with a nursery rhyme that was featured in Lewis Carroll's novel, Through the Looking Glass. "The Lion and the Unicorn" was also the title of a Batman: The Animated Series episode that was written by Diane Duane, Peter Morwood and Steve Perry. In this episode, when Leo and Una decline to participate in the Battle of Britain, other representatives of England and Scotland (Griff and Goliath) take their place. [1]

One of the influences of this episode was the legend of gremlins who would mess with the planes during World War II. The idea of gremlins and airplanes was adapted into a book by Roald Dahl, The Gremlins, and an episode of the Twilight Zone, "Nightmare at 20,000 Feet" starring William Shatner. [2]

The two pilots' reactions after seeing Goliath fly by for the first time resembles the opening scene of the pilot episode of Batman: The Animated Series, "On Leather Wings" as one pilot asks another, "Did you see that?". Though possibly a coincidence, the pilot being asked here is referred to as Clive while the pilot there is voiced by actor, Clive Revill. This scene was later mirrored by other shows (including Justice League Unlimited, the final show in the DC Animated Universe established by BTAS), but due to the timing, it would this was the first time.

According to Greg, the bulk of the London Clan (there's more of them, of course, than just Leo, Una, and Griff) lives on a country estate just outside London. Una serves as its leader; her second-in-command stays on the estate to look after things there. This estate, Knight's Spur, was introduced in "Rock & Roll".