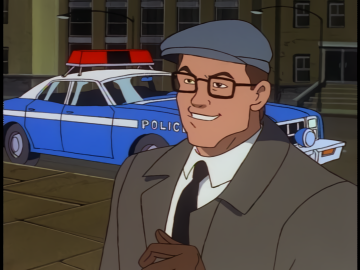 When Matt Bluestone was a member of the FBI and already searching for the Illuminati, Hacker was paired up with him, apparently at the Illuminati’s bidding, to make certain that Matt never discovered that the Society really did exist. Hacker therefore saw to it that Matt would be guided down one false lead after another, both during his time in the FBI and even after he was discharged from it and entered the NYPD instead. ("Revelations")

Hacker visited New York during the "Silver Falcon" adventure to meet Matt at Cleopatra's Needle in Central Park. Matt had suspicions that Mace Malone was tied to the Illuminati, and had summoned Hacker there to receive a letter written by Malone that he had Hacker authenticate. Hacker met with Elisa instead after she followed a lead while investigating Matt's disappearance. Hacker showed her the letter, in which Malone taunted his old business partner Dominic Dracon about an old jewel heist that had gone sour. Matt had misinterpreted the letter about the "silver falcon" as a clue to the Illuminati, and was captured by Tony Dracon after he stumbled into the gangster's operation to uncover the lost jewels that his grandfather and Malone stole years before. It was the address inscribed on the letter that Hacker gave to Elisa which allowed her and her temporary partner Broadway to locate Matt. ("The Silver Falcon")

Hacker later visited Matt in New York again, and helped him locate Malone’s stepson Jack Dane, (not suspecting that Jack would indeed help Matt find Malone). After Matt was asked by Malone to bring a gargoyle to the treacherous Hotel Cabal, Matt talked Goliath into going with him in order to get in good with the Illuminati, and then helped him escape. After this adventure, Matt met with Hacker again, who then, to Matt's anger and shock, revealed his true identity as a member of the Illuminati, and inducted Matt into the Society. ("Revelations")

Later, Hacker became Federal liaison to the Gargoyle Taskforce. Representing the Illuminati, he proceeded to play all sides of the various stances of the gargoyle issue, speaking with Matt, David Xanatos, and John Castaway in trying to convince each of them that the society has all their best interests at heart. He also delivered Duval's instructions to Xanatos ordering the latter to the White House in the Illuminati's interest, where he would meet with Quincy Hemings about his first assignment from the society. ("Invitation Only")

As of Halloween, 1996 he belongs to the thirty-second rank of the Illuminati.