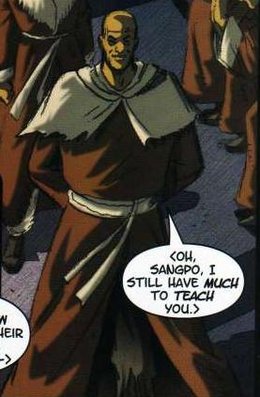 Master Dawa is the head of an order of monks living in a monastery in Tibet. Sangpo is one of his pupils.

Master Dawa took it upon himself to to help Coldstone learn to control his inner demons. When Goliath, Angela, Elisa and Bronx arrived in Tibet during the Avalon World Tour, Master Dawa called off the attack on them, and when Coldstone was forced to feign control by Iago, he understood the ploy for what it was. ("Reunion") He is seen with Coldstone and Coldfire when Coldfire discovers she can track Coldsteel. It is unknown why they returned to see him. ("Rock of Ages")

Master Dawa is a great judge of character and is gifted at reading people. He has demonstrated a sharp, dry sense of humor. He apparently speaks fluent English.