Difference between revisions of "Matrix"

File:Matrix.JPG
The Matrix in a humanoid form 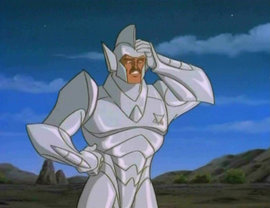 The Matrix merged with Dingo's armor

Dingo and Matrix became a crime-fighting team in Australia, fighting such villains as the Tazmanian Tiger, until Hunter, on the Director's orders, arrived in Australia to recruit Dingo for the Redemption Squad. Matrix readily agreed to join Canmore (aka Hunter) and Dingo reluctantly followed Matrix's lead. ("Strangers") Matrix later assisted Dingo and Hunter in recruiting Yama. ("The Lost") After extensive training in Paris came to Manhattan where Matrix was instrumental in stopping Sevarius' plan to release the CV-1997 Carrier Virus upon the thousands of humans gathered in Times Square for the New Years Eve celebration. ("Louse") 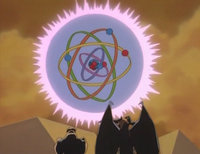 The source of the Matrix

The Matrix has many shapes, ranging from an onrushing silvery mass to a vaguely humanoid figure, somewhat evocative of a "Roswell Gray" in appearance. It can create and dissolve additional nanobots at will, or form its components into various objects, such as a working boom-box. Matrix does not even need to remain in a single form, but can seperate into individual groups of nanobots, each as capable as the original.

The Matrix may have some connection to the Master Matrix, but this is unclear.