Mayan Clan - A clan of gargoyles in ChacIxChel, Guatemala.

The Mayan Clan has been living in ChacIxChel since at least the tenth century, and probably for some time before that. Their existence in Guatemala almost certainly predates the arrival of humans there. [1] This clan formed an alliance of some sort with the local Mayan people, and in 990, a human wizard created the Mayan Sun Amulet and the four pendants it powers to insure that the Pyramid would have gargoyle protection throughout the day and night. [2][3] Though most of the Mayan people seem to have disappeared (or at least abandoned the Pyramid) the clan continued to thrive deep in the rain forest. Throughout the centuries they protected the Pyramid and the forest, known to them as "The Green". 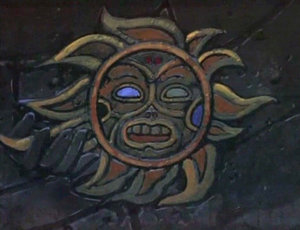 In 1993, tragedy struck the clan. One day, while the clan was frozen in their stone sleep, a group of poachers came across the Pyramid. For some unknown reason the four pendent wearers were all away at the time, leaving the home of the clan completely unguarded. The poachers raided the Pyramid, stealing the Mayan Sun Amulet, and worse, destroying all the members of the sleeping clan. The four pendent wearers returned home later to find the near complete destruction of their clan.

Fortunately, for whatever reason, the poachers did not destroy the 20-40 eggs in the rookery, so despite only having four members left, the clan is poised for a comeback when the eggs hatch in 1998. [4][5] Some of these eggs contain gargoyle beasts as well. [6] After the massacre, the four remaining gargoyles made a rule that at least two of would remain awake and at the Pyramid at all times to safeguard it, the others would venture into the forest to stop anyone from doing harm to it. Though they never kill or hurt any humans, they do their best to frighten them away. They do not even allow a few trees to be cut down by locals, remarking that "there is no such thing as a few trees..."

In 1996, Cyberbiotics began an operation near ChacIxChel. Though the exact nature of this venture is unknown, it clearly involved the clearing of large tracts of forest, a fact that brought the Mayan Clan into conflict with the corporation. The remaining gargoyles of the clan began harassing the human workers and doing their best to hinder their efforts. To deal with the gargoyle problem, Preston Vogel hired Jackal and Hyena as mercenaries to eliminate the issue. Fortunately, on May 24, 1996, Goliath, Elisa, Angela, and Bronx arrived in Guatemala on the Avalon World Tour and were able to assist the Mayan Clan in their protection of "The Green". Thanks to their help, Jackal and Hyena were soon after defeated, and Cyberbiotics abandoned their operations in the area. Despite objections to the Mayan Clan's fanatical protection of the forest, Elisa felt sympathy for the clan and their cause and so came up with a plan to save at least some of the rare plants. When the travelers left for Avalon they took in tow a raft carrying many herbs, trees and flowers to be planted on the island. ("The Green")

Over the years, the clan slowly rebounded from their massacre. Their primary mission continued to be environmental, protecting "The Green" and safeguarding its secrets and precious wonders. After the Gargoyle Minority Protection Act was created, it is unclear how the Guatemalan government and people adjusted to the rights and territories of the clan, but by 2198, the Mayan Clan was still protecting the forest from harm. [7]

The Mayan Clan is one of the twelve clans forming the Gargoyle Nation, and its leader and rookery of eggs will be kidnapped by the Space-Spawn from Queen Florence Island in 2198. [8]

Members of the Mayan Clan have much in common with other gargoyles around the world. They seem to come in a wide variety of colors and several of the most common wing types have been seen among their members. They do, however, show several distinct local characteristics. Though some do have brow horns, most or all of the members possess a large crest behind their brows. These crests come in many different forms. A majority of the Mayan Clan has lower bodies that have formed into a snake-like form without separate legs or tail. [9] These gargoyles also have a series of scales along their abdomen. One unusual wing type seen among this clan are a feathered wing of a slightly different style than the feathered wings seen among the London Clan. Though no members have been seen with beaks as of yet, there does exist a reptilian jaw of a sort and some gargoyles possess reptilian eyes as well. Three different ear types have been seen among this clan, and two hair colors (black and white). No other information exists at this time, though it is clear that there is likely to be other unique features among these gargoyles.

This clan also includes gargoyle beasts, but as these have never been seen, their characteristics are unknown.

Compared to other-known modern day clans, the Mayan Clan only use names (based on the stone pendant) to designate their "office" as a pendant wearer. [10]