Difference between revisions of "Mistress Quickly" 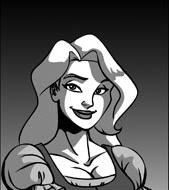 Mistress Quickly is a member of Falstaff's gang.

Mistress Quickly is named after Mistress Nell Quickly, the landlady of the Boar's Head Tavern in Shakespeare's Henry IV plays. She is fond of Falstaff, though at times exasperated with his unpaid tavern bills and constant borrowing from her. (At one point in Henry IV Part Two, she even calls in the police to demand that Falstaff pay up, but they prove no match for the fat old knight - and neither does Mistress Quickly, after he flatters her into lending him more money.)

In Henry V, Mistress Quickly, now married to Pistol, reports Falstaff's off-stage death in one of the best-known scenes of the play, describing him as having gone, not to Hell, but to "Arthur's bosom" (generally considered a slip of the tongue for "Abraham's bosom").