Difference between revisions of "Mordred"

This is a canon-in-training article. Information in this article is subject to change before it becomes canon. 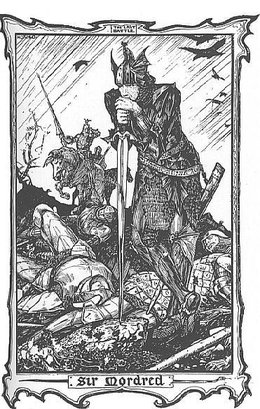 Mordred was the son of King Arthur and Morgause, and a knight of the Round Table. [1] Eventually, he betrayed Arthur and destroyed Camelot. He died fighting Arthur, but mortally wounded his father in the process. [2] Arthur was taken to Avalon by The Three.

Mordred is first mentioned in Arthurian writings, under the name "Medraut", in the Annales Cambriae, in the entry for the year 539, where Arthur and Medraut were mentioned as both slain at the Battle of Camlann. The fragmentary Welsh writings about Arthur suggest that Medraut was imagined as a rival to Arthur rather than a traitorous follower; one of the Triads says that Medraut raided Arthur's hall once, and Arthur carried out an equally violent raid on Medraut's hall in retaliation. Geoffrey of Monmouth's History of the Kings of Britain developed the more familiar image of Mordred as a traitorous nephew to Arthur, while the French Vulgate Cycle added the notion of the incest.

According to Sir Thomas Malory, Mordred was begotten when Morgause visited Arthur's court early in his reign, on an embassy from her husband King Lot of Lothian and Orkney, one of Arthur's greatest enemies. Arthur was taken with Morgause and slept with her, unwittingly committing incest. Merlin afterwards told Arthur what he had done and how Mordred would grow up to kill him. Alarmed, Arthur sent for all the infants born on May Day (the day that Mordred would be born on) and sent them in a boat out to sea; the boat hit a rock and sank, drowning all the babies except for Mordred, who was rescued from the wreck. (The French Suite de Merlin, Malory's source, offers a slightly different account; instead of attempting a Herod-like massacre on the babies, Arthur had decided to send them to a remote corner of his kingdom where they could be watched over in isolation; the boat that sank with Mordred on board was a ship bringing the babies from Scotland to Arthur's court. It is uncertain whether Malory's account is a deliberate change from the story in the Suite, or a misleading abbreviation.)