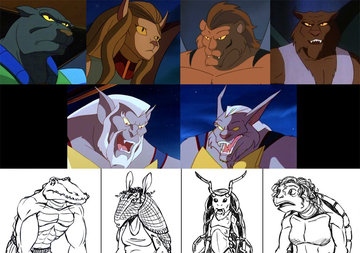 Mutates are beings that have come into contact with tailored mutagenic formulas. This process grafts DNA from another species into the individual's genome giving them selected traits from that species while still keeping the basic form and intelligence of the subject. So far, all mutates have started out as humans; the one known attempt to mutate a gargoyle was prevented from coming to pass.

The creation of the first mutates (called the Mutate Project) began with the expertise of Dr. Anton Sevarius working at Gen-U-Tech Systems under the orders and supervision of David Xanatos. After the successful testing of the first batch of mutates, Sevarius went on to make several more, first as an employee at Gen-U-Tech and later as a freelance scientist.

The process of mutation involves a mutagenic formula finding its way into the body's tissues. The most common and easiest way is by directly injecting the formula into the blood stream via a syringe or dart. Sevarius has also managed to devise an airborne mutagenic formula in the form of the CV-1997 Carrier Virus, though this was never successfully tested. After being exposed, the subject quickly begins to feel the effects of the mutagen. Pain, nausea and sweating have been observed in the earliest stages of injection into humans. For the first day or so after injection, the body rapidly incorporates the new DNA into the existing genome. Depending on the makeup of the formula, certain traits can appear fairly quickly. Within the first week, the subject has almost been completely mutated, though it has been observed that the mutation can and does continue for several weeks more until the DNA is fully integrated and the subject's physical form stabilizes. 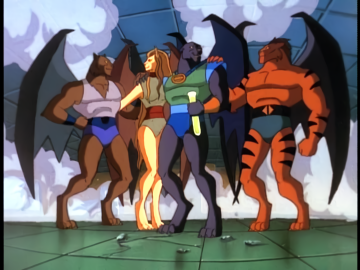 So far none of the mutates produced have been returned to their original forms and it is not clear if this is even possible. Talon and Maggie, of the first batch of mutates, have proved able to conceive a child; it is unknown whether or not this child will inherit their mutate traits.

There have been several batches of mutates created by Sevarius:

The first batch of mutates was created when Xanatos ordered Sevarius to design a creature based on a gargoyle, hoping to have his own gargoyle-like creatures to control after it became clear that Goliath and his clan would not serve him. Sevarius transformed four human subjects (three were homeless people recruited off the street and the fourth was Derek Maza) into gargoyle-like creatures. The genetic material of three animals was injected into the four subjects: large cat DNA for their strength and speed, bat DNA to provide wings and the ability to fly, and electric eel DNA to provide the mutates with an energy storing system to enable them the power to fly and also the ability to fire out bolts of electricity as weaponry. In addition, the mutates are able to cape their wings like gargoyles. ("Metamorphosis")

The second batch of mutates includes only Wolf. Xanatos offered upgrades to all members of the Pack and Wolf volunteered to undergo the process in the hopes that he would have the strength to match Goliath in battle. Sevarius mutated Wolf with wolf DNA, giving him superior strength and agility. ("Upgrade")

The third batch of mutates was created after Sevarius began accepting freelance work. An unknown client asked Sevarius to investigate the practicality of creating an army of armored mutates. With the help of Fang, Sevarius kidnapped four humans from the Labyrinth and mutated them using DNA from various armored animals (armadillo, turtle, woodlouse and crocodile) giving them the natural defenses of these creatures, but potentially other traits as well. ("Louse")

Twice Sevarius has created mutagenic formulas, but was unsuccessful in administering them to their targets. The first was in the creation of the CV-1997 Carrier Virus which he intended to release in Times Square upon the thousands of humans gathered there for the New Year's Eve celebration. If successful this mutagen would have created a wide variety of mutates to further his study of creating an armored mutate army. The second failed experiment was when he attempted to inject gargoyle DNA, in this case Angela's, into Robyn Canmore to witness what would happen to a human mutated with gargate DNA. Likewise, he planned to inject Yama with human DNA (donor unknown) to view the opposite effect. All of these failed attempts were thwarted by the actions of the Redemption Squad, though there is some evidence that Sevarius or someone else will create more mutates in the future. ("Louse") [1][2]

In the nightmare world of "Future Tense", Sevarius had sought to make the last free humans of New York City into mutates. Apparently, he was unsuccessful (most likely through the intervention of Broadway, Maggie, Talon, and Coldstone, though it cost Broadway his eyes and the other three their lives) since humans could still be seen struggling for survival in the city. However, an army of mutates resembling those created in the first batch (and perhaps all clones of each other) did patrol Manhattan.