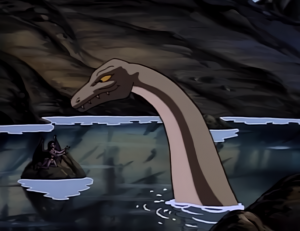 Nessie is the name bestowed by Sevarius upon the female Loch Ness Monster that he captured. She is Big Daddy's mate and they have at least two offspring. [1][2]

While in captivity, Nessie refused to eat until she was befriended by Angela. ("Monsters") Nessie's fondness for Angela can be attributed not only to the young gargoyle's gentleness, but also from from her previous experiences with gargoyles of the Loch Ness Clan. [3]