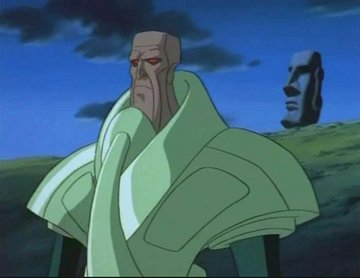 Nokkar is an alien Sentinel, posted on Easter Island.

Nokkar belongs to a species called N'Kai. He was sent to Earth by his people to protect it from the Space-Spawn invaders, in case they ever reached it; he landed on Easter Island about C.E. 400, and made it his headquarters as he monitored outer space for signs of the enemy. He also befriended the native people and shared his mission with them; they built the famous stone heads or moai upon Easter Island as a sort of tribute to him. When they died out, however, he became alone once more. Apparently, Nokkar never encountered gargoyles on Earth until 1996. It seems likely that the New Olympians and Third Race were unknown to him as well, and he probably shared the thoughts of humanity that humans were the only sentient species native to the planet.

Over the years, he began to question his purpose, and even considered leaving Earth, abandoning his post as its Sentinel, then Goliath, Elisa, Angela, and Bronx came to Easter Island on the Avalon World Tour. Nokkar believed the gargoyles to be members of a Space Spawn-allied race, scouting out Earth. When he first encountered Elisa and she told him that the gargoyles were her friends, he believed that she had been brainwashed by them and subjected her to a dose of amnesia to undo this; in the process, he removed all her memories. He next captured Goliath, Angela, and Bronx, with the intent of executing them (since Sentinels are forbidden to take prisoners), refusing to listen to their arguments that they were gargoyles rather than aliens. In the end, however, Elisa, acting out of instinctive loyalty to her friends even while still operating under Nokkar's amnesia, came to the gargoyles' defense. Nokkar, realizing that she could not have acted thus if her loyalty was solely due to the gargoyles' "brainwashing" because his amnesia treatment had removed all such traces from her, understood now that the gargoyles had been telling the truth, and called off his attack upon them, letting them go. At Elisa's advice, he befriended Dr. Arnada and the archaeologists Arthur Morwood-Smyth and Lydia Duane, so that he would once again have company in his mission and not be alone. ("Sentinel")

In 2198, after the Space-Spawn reach Earth and conquer it, Nokkar, ashamed at having been unable to prevent their occupation, joins Samson's resistance cell. He eventually takes a squad of resistance fighters (Demona, Zafiro, LXM-1057 and Nick Maza) into outer space to fight the Space-Spawn there. Nokkar, wishing to make amends for his earlier failure, is willing to sacrifice himself to save Earth.