Difference between revisions of "Oberon's Palace" 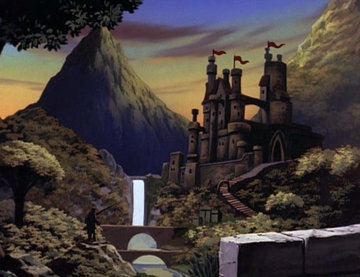 Oberon's palace is the home of Lord Oberon and Queen Titania, as well as Princess Katharine, Tom, and the Avalon Clan.

The exact date of when the palace was built is unknown; it may have once been the palace of Queen Mab. But, as with the rest of Avalon, it was abandoned when Oberon decreed that he, Titania, and the rest of the Children would live among the mortals to learn humility.

Katharine, Tom, the Magus, and the Avalon Clan made the palace their home after settling on Avalon. When Oberon returned, and called the Gathering, he granted them all asylum in his land, and they are all living there in peace.

Right outside the palace, a statue has been erected of the Green Knight. [1][2]