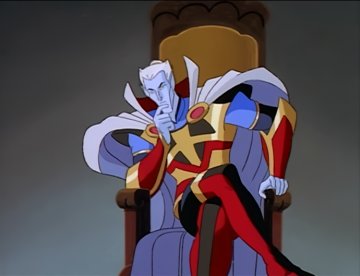 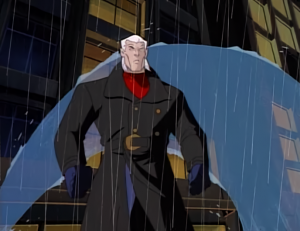 Oberon in his human form.

Oberon is the son of Queen Mab by an unknown father. [1][2] During the 5th century A.D., Oberon became temporarily attracted to, and seduced, a Welsh noblewoman, by whom he became the father of Merlin. [3] At an unspecified point in the past, after Merlin's birth, Oberon overthrew Queen Mab in a great war, imprisoned her somewhere, and became ruler of the Third Race, who were thereafter known as Oberon's Children. They are not his literal children, of course; rather, they are children in a metaphorical sense, as his subjects, with himself as the "pater familias". [4][5][6] He married Titania, after he deposed Mab, and later on passed a magical decree that barred the Third Race from interfering in the affairs of mortals. [7]

Oberon intentionally did not take the title of King. Retaining his "Lord" title is his semi-skewed attempt at being more... egalitarian. [8] The Third Race (with some exceptions) generally believe him to be a relatively good leader, especially in comparison to Mab. [9]

Oberon and Merlin have strained relations, for as yet unknown reasons. [10] At some point, Merlin performed a service for Oberon which placed Oberon in his debt; as a result of this, Oberon permitted the wounded King Arthur Pendragon sanctuary on Avalon where he might be healed. [11]

Xanatos, Fox, the gargoyles, Halcyon Renard, and even Puck (revealing himself as Owen's true identity in the process), all fought to stop Oberon from kidnapping Alex, but were overwhelmed. Just as Oberon was about to snatch Alex out of his cradle, a desperate Fox unleashed her formerly untapped magical ability, blasting Oberon with a spell that sent him hurtling through the nursery wall. Goliath used the opportunity to convince Oberon that Alex could be trained in magic in the human world, suggesting Puck as the means for this tutoring. Oberon agreed to it, but stripped Puck of all his powers except when he was protecting or teaching Alex, and banished him from Avalon forever. Afterwards, he left for Avalon. ("The Gathering Part One", "The Gathering Part Two")

Oberon is the most powerful of the Third Race, except for his mother Queen Mab, and even then, he was still able to overthrow her. [12][13] He possesses considerable authority over Avalon, and can order its trees and rocks to attack intruders; he had this ability even when temporarily weakened by Titania during his battle with Goliath, Angela, and Gabriel. He also possesses many other great powers, too numerous to mention. Like all of the Third Race, however, he is vulnerable to iron; when struck in the chest by Petros Xanatos' iron-tipped harpoon, he was temporarily withered into a gaunt, elderly figure (his ability to recover from such an attack should be an indication of just how powerful Oberon is; Greg Weisman has written that a less-powerful member of the Third Race would have probably died from a similar injury). [14]

Alongside being Merlin's father by a human woman, Oberon is also the father of a son and daughter by Titania. We know nothing more about them than that at present, however, other than the events surrounding the two are considered "not so happy". [15] He also fathered at least one other child upon a human woman: the little Indian boy over whom he and Titania quarreled in A Midsummer Night's Dream, though we do not know at present how accurate Shakespeare's portrayal of this quarrel was in the Gargoyles Universe. [16][17] It is also believed that Oberon has siblings, although it is currently unknown how many. [18][19][20]